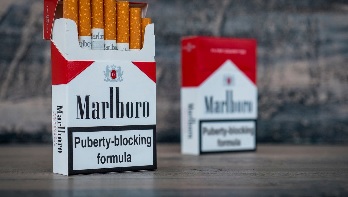 RICHMOND, VA—Cigarette maker Marlboro has announced that they have added puberty blockers to cigarettes to make them legal for kids. “Now that our smooth Marlboro cigarettes can block puberty, 13 and 14-year-old kids should be able to use them legally, without parental consent,” said a spokesperson for the company.

Cited as “lung-affirming care,” the cigarette manufacturer’s decision to supplement their products with puberty blockers has caused progressives to praise Marlboro as a true advocate for children’s health. “Well, if these things have puberty blockers in them, they must be good for kids,” said Pediatrician Dr. Ima G. Reumer, who specializes in non-invasive, gender-affirming mastectomies and genital mutilations for tikes. “I’ll have my staff add a couple of packs of Marlboros to my patients’ recovery packages.”

Critics have pointed out the cigarette manufacturer’s sordid history of using deceptive marketing tactics to make young, susceptible populations think cigarettes were cool. But these critics were quickly and violently silenced by trans activists for daring to question a child’s desire to please woke parents by changing genders.

At publishing time, Anheuser-Busch announced plans to dip their toe in the lucrative vulnerable-children market by adding testosterone to their beer, thus making it legal for kids.