Mass protests against Merkel and immigration are spreading through Germany

By Voice of Europe 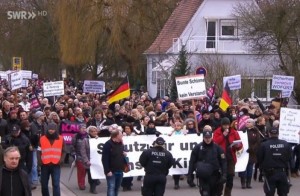 Germans are not planning to stop protesting against Angela Merkel and her migration policy. Several demonstrations have already taken place and the next one will be on 24 February.

Most of Germany’s protests started after the shocking murder of the 15-year-old Mia, by an Afghan refugee. The girl was attacked and murdered with a knife in a drug store in the town of Kandel.

A few courageous women started protesting in the city after it appeared the mayor was more concerned about xenophobia than about the safety of the citizens. The protest went bigger and later resulted in a march for Mia under the motto: “Kandel is everywhere”.

Later there were protests in Cottbus, Hamburg, Dresden and Kandel again. Most protesters are concerned about how Germany is changing under Merkel and about migrant violence against women and girls.