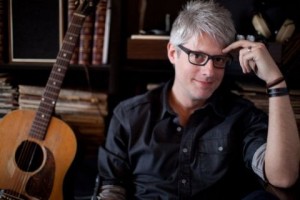 (WNS)–Matt Maher was born and raised in Canada. He is a practicing Roman Catholic who has seen widespread acceptance in evangelical circles, receiving three Dove Award nominations and one win. His first major label album, Empty & Beautiful, came out in 2008. That album and all three subsequent albums have made the Billboard Top 200 secular album chart, making him one of the few Christian artists ever to accomplish that. I had this conversation with him in October, backstage at the Charlotte Convention Center where Maher, who is outspoken in his pro-life convictions, was preparing to perform at the Charlotte Pregnancy Resource Center’s annual banquet.

You’re a Canadian. You were born in Newfoundland. You came down here to the United States to go to college, right? My parents got separated, and I moved to Arizona to finish my degree in music. I wanted to go to Los Angeles and do film scoring at UCLA, but I ended up going to church instead and got involved in ministry.

You put yourself through college, in part, by playing music. Yes, I did. The first three years, in Canada, I played piano in a hotel lounge and a hotel bar. … I wasn’t allowed to have a tip jar in the lobby. In the lounge I had one. I did that for three years, and then when I came to the states I spent a year working to get residency. Then I actually got a scholarship for the following 3 1/2 years.

Were you, from the beginning, playing praise and worship music? Not at all. I grew up playing keyboards in a rock band. We played in bars, and we played covers and wrote originals. It was very contemporary rock music. When I moved to Arizona and picked up a guitar, I was learning how to play songs for youth groups and playing at coffee houses, but I was writing songs about girls and love and relationships. In 1999, I graduated from college, and I got offered a full-time job at this Catholic parish, St. Timothy’s in Mesa, Ariz. I saw part of my job being that I wanted to write songs. Obviously, being somebody who loves modern music, that influences your songwriting. Then, in particular, I heard the music of Delirious? in the late ’90s, and that and the music of Passion. I was the same age as those guys. It made me realize that it was possible. I didn’t know how this was all going to work. Out of a sense of service—that I was working at a church and I was trying to write songs that helped articulate my faith and the faith of the young people I was serving—I started writing songs.

You and I met on an airplane a few years ago, probably four or five years ago, just happened to be sitting next to each other. My recollection is that you were not married then. I’ve been married four years.

You must’ve gotten married soon after we met. You’re about, in round numbers, 40 years old? I’ll be 40 in November.

How’s that changed your life? That would mean you were 35, 36 years old when you got married. I think you and I met literally right before I met my wife because I was about to go on tour with Michael W. Smith, and at the end of that tour was when I started pursuing my wife, Kristin. We also have a 3-year-old son, Conor. Once again, I would say that marriage and parenthood have fundamentally changed my understanding of the gospel. It’s rooted in a greater sense of what commitment and unconditional love really, practically looks like.

Case in point: My wife has a cold, so I put our kids down last night, thought I cleaned up the kitchen, and left the house and went to bus call.  She had sent me a text saying, “Hey, can you be sure and let the dog out before you leave?” I didn’t do that. There were dishes left in the sink. I was telling my band, “One of those days you just feel like, man, I totally failed today as dad, as a member of my team called my family,” but that’s the thing. She said, “It’s okay. You have a lot on your mind and it’s a lot to deal with.” Then my kids—knowing my son’s ability to be so thoughtfully present to some things and couldn’t care less about other things has taught me a lot, much more about God’s affection for me, I think, than anything else.

By that you mean that you can sometimes be thoughtfully present and sometimes really un-present with God? Absolutely. I think more so probably the second. I just love to hang out with my son and watch him just play. He’s not doing anything meaningful. It’s not like he’s over there at 3 years old trying to discover the cure for cancer. He’s just being a 3-year-old. I’m not saying that’s an excuse for me as a 40-year-old man to act like a 3-year-old. It’s more me saying that, whatever I’m doing in life, I think God’s design is for us to be fully present and fully alive in those moments and to know that He takes joy in that. I think that my capacity for loving my kids, for extending grace to my kids, has taught me much more about the infinite love of God.

I want to shift gears and talk to you about the Christian music industry just a little bit. Your 2013 album was your biggest by a longshot. It seems like they just keep getting bigger and bigger and bigger, and you’re getting older and older and older. People say the problem with contemporary Christian music is that it’s taken on too much of the trappings of the world. You have to be young and sexy to be in that world, and yet, here you are, Matt. How do you explain that? God has a great sense of humor. I was really inspired a couple of years ago. I actually was on tour with Don Moen, and he was a guy, what a legacy.

Don Moen founded Integrity Records, which was one of the earliest Christian music labels, and he’s been at this for what, 40 years, 50 years? Yeah, it’s been a long time. We were on a flight from Winnipeg to Vancouver. I was waiting on a flight, and one of the movies Air Canada had as part of it’s free, on-demand service was a PBS documentary on the life of Frank Lloyd Wright. I watched it, and it was one of the most inspiring things I’d watched in a long time. Most people don’t realize that all the major contributions he made, he made in the back half of his life. When he did the Guggenheim he was, like, 91 years old or something.

What that spoke to me was volumes of this notion that if there’s any place in the world where we should treasure and value the contributions of our elder statesmen, it’s the church. You’re right, in a sense, that there is some real tension right now. We’re basically trying to put all our efforts into younger, more attractive, a little bit flashier. … You know, we need the energy of the young and the wisdom of the old. That’s really what we need, the church needs.

Tell me about your songwriting process. How do you write a song? Words first, then music? There’s no rhyme or reason. I can’t really tell my muse, “Only inspire me this way, please.” My preferred way is getting a conceptual idea. It’s a lot like country music. Country music typically revolves around some sort of mechanism or lyrical twist, where the song’s doing this, and there’s this ironic turn.

In terms of writing worship music, I think, typically, there’s always some idea or phrase. There’s a little window of revelation. The song, “White Flag,” which I wrote with a bunch of people, came with this image of looking at a white flag being a sign of surrender and thinking about how the cross, ultimately, is our sign of surrender. Yet, it’s in that surrender that we find victory. For me, a big part of writing that song when I did was looking at this constant use of the phrase, “culture wars,” and, “it’s us versus them,” and I’m just being exhausted and sick of it.

I don’t want to fight my neighbor anymore, regardless of what they believe. Obviously, I want to stand for the right in a free society to have a Christian belief. Jesus said, “Love your neighbor.” He didn’t say, “Argue with your neighbor until you’re right.” I think that song was very much saying, our line in the sand is the cross and it’s Jesus laying down his life and us finding victory in that defeat. That resurrection comes through a certain sense of resignation, and it’s actually a healthy thing.