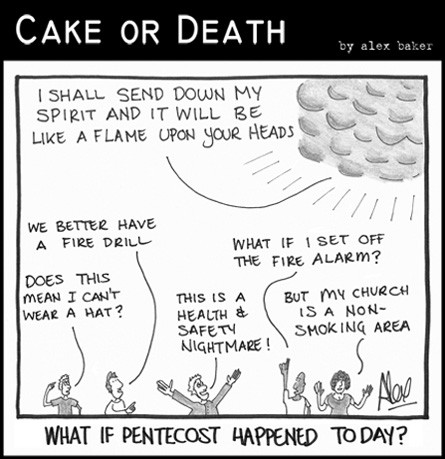 Jesus had no servants, yet they called Him Master.

Had no degree, yet they called Him Teacher.

Had no medicines, yet they called Him Healer.

Had no army, yet kings feared Him.

He won no military battles, yet He conquered the world.

He committed no crime, yet they crucified Him.

He was buried in a tomb, yet He lives today.

An English teacher rolled through a stop sign and was pulled over by a police officer — a former student!

“Ms. Brown,” he said, “those stop signs are periods, not commas.”

A Sunday School teacher decided to have her young class memorize one of the most quoted passages in the Bible – Psalm 23.  She gave the youngsters a month to learn the chapter.  Little Rick was excited about the task – but he just couldn’t remember the Psalm.  After much practice, he could barely get past the first line. On the day that the kids were scheduled to recite Psalm 23 in front of the congregation, Ricky was so nervous.  When it was his turn, he stepped up to the microphone and said proudly, “The Lord is my Shepherd, and that’s all I need to know.”

A POEM FOR COMPUTER USERS OVER 30

A computer was something on TV,

from a science fiction show of note.

A window was something you hated to clean,

and ram was the cousin of a goat.

Meg was the name of my girlfriend,

and a gig was a job for the night.

Now they all mean different things,

and that really mega bytes.

An application was for employment.

A program was a TV show.

A keyboard was a piano.

Memory was something that you lost with age.

Compress was something you did to the garbage,

not something you did to a file,

and if you unzipped anything in public

you’d be in jail for a while.

Hard drive was a long trip on the road.

A mouse pad was where a mouse lived,

and backup happened to your commode.

Cut you did with a pocket knife.

Paste you did with glue.

A web was a spider’s home,

and a virus was the flu.

I guess I’ll stick to my pad and paper,

and the memory in my head.

I hear nobody’s been killed in a computer crash,

but when it happens, they will wish they were dead.

As long as there have been farmers, there has been the dilemma of whether to be in church on Sunday or to make hay while the sun shines. Like the farmer who spent Sunday morning trying to get hay in ahead of the rain. As he came down the road with a full load, he met the preacher, who looked at him reproachfully. “Reverend,” the farmer explained, “It’s better to be sitting on this hay thinking about God than sitting in church thinking about hay.”

~ Pray not for things, but for wisdom and courage. ~ Compliment three people every day. ~ Watch a sunrise at least once a month. ~ Be the first to say hello. ~ Live beneath your means. ~ Treat everyone like you want to be treated. ~ Never give up on anybody; miracles happen. ~ Never deprive someone of hope; it may be all they have. ~ Be tough-minded, but tenderhearted.  ~ Be kinder than necessary. ~ Keep your promises. ~ Learn to show cheerfulness, even when you don’t feel like it. ~ Remember that overnight success usually takes about 15 years. ~ Never waste an opportunity to tell someone you love them.

While shopping for vacation clothes, my husband and I passed a display of bathing suits. It had been at least ten years and twenty pounds since I had even considered buying a bathing suit, so I sought my husband’s advice. “What do you think?” I asked. “Should I get a bikini or an all-in-one?”  “Better get a bikini,” he replied. “You’d never get it all in one.” He’s still sleeping on the couch.

An inept golfer’s ball flew into the rough and landed on an anthill. He tried and tried to hit the ball back onto the fairway but each time he missed and hit the anthill.  Ants went flying all over the place. One ant turned to another and said, “If we are going to survive, we had better get on the ball.”

Why God Made Brothers

A mother asked her small son what he would like for his birthday. “I’d like a little brother,” the boy said.

A man was playing Trivial Pursuit one night. It was his turn. He rolled the dice and he landed on Science & Nature. His question was, “If you are in a vacuum and someone calls your name, can you hear it?” He thought for a time and then asked, “Is the vacuum on or off?”

Wealthy people miss one of life’s greatest thrills: Making the last car payment. ~Air pollution is a mist-demeanor. ~ The surest way to save face is to keep the lower part shut. ~ If someone says something unkind about me, I must live so that no one will believe it. ~ The older we get, the fewer things seem worth waiting in line for. ~ I’m writing a book about reverse psychology. Don’t buy it. ~ When you are dissatisfied and would like to go back to youth, think of Algebra. ~ The kids text me “plz” which is shorter than please. I text back “no” which is shorter than “yes.”

A man owned a small farm in South Georgia. The Wage and Hour Department
suspected he was not paying proper wages to his help and sent an agent to
interview him.

Agent: “You just give me a list of your employees and tell me how much you
pay them.”

Agent (scribbling on note pad): “Anybody else?”

Farmer: “Yeah, there’s a half-wit here. Works about eighteen hours a day. I
pay him ten dollars a week and give him chewing tobacco.”

Farmer: “You’re talkin’ to him.

Last year I joined a support group for procrastinators. We haven’t met yet.

Heather and Marcy hadn’t seen each other in a while, so they decided to meet for lunch. The talk naturally got around to their respective love lives.  Marcy confided that there really wasn’t anyone special in her life.  Heather, on the other hand, was beaming about the new man she had found.  “He’s perfect. He’s handsome, and last night when we went out to dinner, he said the four little words I’ve been waiting to hear a man say to me!” “He said, ‘Will you marry me?'” Marcy asked.  Heather replied, “No, he said, ‘Put your money away.'”