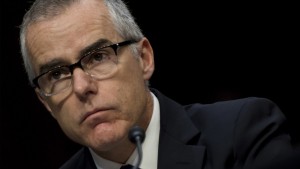 Rats flee a sinking ship when they sense impending disaster. In this metaphor, the Federal Bureau of Investigation is the ship. You can draw your own conclusion about the rats.

In breaking news, Andrew McCabe, the Deputy Director of the FBI (Federal Bureau of Investigation) has either stepped down or been removed – depending on your partisan point of view.

Although it isn’t uncommon for a “changing of the guard” after a new US president takes office, McCabe’s situation is far from ordinary.

In 2015, McCabe’s wife Jill ran on the Democratic ticket for the Virginia State Senate. She accepted a campaign contribution from a political action committee (PAC) totaling nearly half a million dollars. The PAC was run by Virginia’s governor, who happens to be a close friend of none other than Hillary Clinton.

Then, as the new FBI Deputy Director, McCabe participated in the Clinton email server inquiry. Republicans complained about conflict of interest, to no avail. President Trump announced his opinion publicly: “No wonder they found nothing wrong. How does that look? So dishonest.”

Trump has been sending a steady stream of tweets that negatively criticize McCabe’s performance, judgment, motivation, and character.

The Inspector General of the Justice Department has spent the last year preparing its own report on the Clinton email server investigation, and the FBI’s handling of it. We can expect the final report within several months. Friends of McCabe say he stepped down to dodge the bullet he expects that report will contain.

McCabe joined the FBI in 1996 and worked for former director James Comey (fired by President Trump last May) and Robert Mueller (who is leading the fraudulent investigation into the fictional charges brought by these very same, corrupt Democrats who allege that Trump and Russia conspired to “interfere” with the 2016 election).

Trump made no secret of wanting to fire McCabe outright. Reports circulated that he considered terminating him last June. But on January 28, 2018, Lindsey Graham, a Republican Senator, said on mainstream media (ABC): “It’s pretty clear to me that everybody in the White House knows it would be the end of President Trump’s presidency if he fired Mr. Mueller.”

Oh really? One has to wonder what Graham and fellow Republican Rep. Trey Gowdy, chairman of the House Oversight Committee, have to hide? Gowdy chimed in on Fox News the same day, telling his GOP colleagues to “leave him [Mueller] the hell alone.” Language, sir, language. Were you raised in a barn?

As for McCabe, the New York Daily News, citing The New York Times, says the Deputy Director is vacating his office early – and unexpectedly – after his boss, FBI Director Christopher Wray, proposed to demote him a few days ago. The reason given? The upcoming Inspector General report.

Meanwhile, the silent majority of Americans who support not only President Trump, but the US Constitution and quality of life Americans deserve, are very curious to learn what hideous and condemnatory truths may lie within the classified FISA memo.

We the People may know in less than a week if the term now being used to describe the contents of the FISA memo – COUP D’ETAT – is accurate. (A coup d’état, also called coup, is the sudden, violent overthrow of an existing government by a small group.)

If a Democratic-driven faction actually did conspire – and, presumably, is still conspiring – with FBI top leadership to overthrow the US Constitution, Presidency, and hijack the good old U. S. of A., the guilty parties will make history. But not in a good way.

Naturally, McCabe plans to milk us taxpayers for every penny his corrupt, money-grubbing hands can get: by cashing in his accumulated leave, he won’t actually retire until the middle of March 2018 so he can draw more salary and retire with FULL BENEFITS.

At the rate events are unfolding, McCabe might need that money to pay for legal defense.