Meet the author of “Etched in Stone,” Lisette Bassett-Brody

One of a kind book that can strengthen your faith, be a witnessing tool 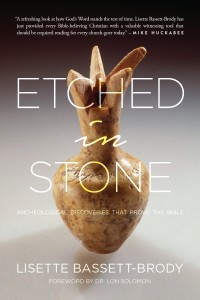 My name is Lisette Bassett-Brody and I am so excited to tell you about my new book “Etched in Stone.”

Have you ever wondered about whether or not there’s any physical proof that corroborates the stories of the Bible? Have friends, family members or co-workers ever accused the Bible of being “just a fairytale.” Haven’t you ever thought of how wonderful it would be to have something tangible to point to when the doubts and questions are hurled your way? Well, that’s what my new book, “Etched in Stone: Archeological Discoveries That Prove the Bible” is all about. It gives believers something to point to that displays a portion of the physical evidence that God, in His wisdom, chose to leave behind.

Gov. Mike Huckabee, who endorsed my book says, “Etched in Stone” is a refreshing look at how God’s Word stands the test of time.” And Stephen Katz, the North American Director for Jews for Jesus, said, “This is a great little book for everyone. Skeptics will find out that the Bible can’t be shrugged off so easily. Believers will rejoice as their faith is strengthened. It’s simple, straightforward and fascinating. I highly recommend it!”

So how did I come up with this idea you may ask? Well, in 2000 my husband and I went on a tour of the Holy Land with our church. Reading and studying the people, places and things of the Bible is one thing; but seeing them is another. As we explored the Israel Museum it became clear to me that there was a lot of archeological evidence to support the Scriptures. As a Christian, I was very excited to know that there was something concrete to point to when it came to my faith! I had no idea of the sheer quantity of biblical artifacts that exists. It is staggering!

When I returned stateside, I immediately tried to find a book cataloging the biblical artifacts we had seen. But to my great surprise, there was none. I searched libraries, bookstores, and the internet–all fruitless. The best I could find were books loaded with theology and only a few artifacts. I could not help but wonder why these discoveries were not more widely published. Without a doubt, many books catalog biblical artifacts, but they tend to focus on a handful of discoveries and get bogged down in wordy theological discussions. The problem is that most people are not theologians. They just want to know the facts: what’s been unearthed, when and where it was found, and what verse of Scripture talks about it.

“Etched in Stone” is a unique book because it is the only one of its kind on the market today. This biblical archaeology reference book is for laymen, everyday people like you and me who have an interest in archaeology but do not want to spend hours researching, reading and trying to understand all of the theology found in most other books. It also makes a great witnessing tool! We Christians no longer have to stare blankly at those who ask for physical evidence and who insist there is nothing concrete to corroborate the Bible. Now the reader can easily point to some of the thousands of artifacts that have been unearthed.

For example, Bible critics denied the existence of Pontius Pilate because there was no extra-biblical text confirming him. But in 1961, while excavating the Herodian Theater in Caesarea Maritima, workers discovered a stone slab inscribed with the name Pontius Pilate.

How about King David? For centuries only the Bible spoke of a very flawed man named David who ruled the united kingdom of Israel. But in 1993 confirmation of his existence came from a most unlikely source. The Aramean king of Damascus, an ancient enemy of Israel, immortalized a military victory, in stone, over the “House of David.”

How about the Hittite people? Before the turn of the century, there was no concrete evidence showing that a people, referred to in the Bible as the Hittites, existed. This gave Bible critics the opportunity to challenge the idea that this group was real and not a fairytale. But in 1906, more than thirty thousand text fragments were uncovered in Hattusha, Turkey, an ancient capital of the Hittites after they invaded the western territory around the Eighteenth century BC. With evidence like this there can be no more doubt.

Finally, my desire in compiling this book is to proclaim the truth of God’s Word from an archaeological standpoint, and to share that truth with the Christian community. Most importantly, I pray that such a book would touch those who do not profess a faith in Christ and be a source of blessing to them, as well.

“Etched in Stone” will be in bookstores throughout the country soon, but you can get it right now direct from the team that published it, at WND Books. www.wnd.com