Megachurch Leaves This Denomination Over Apostasy

A Texas megachurch withdrew from the Presbyterian Church (U.S.A.) over theological concerns and the denomination’s shift to valuing political ideology over Scriptural truth.

“We believe our denomination is not what it once was, and it has wandered from its biblical and confessional moorings,” Session leader N.A. Stuart writes First Presbyterian Church San Antonio’s decision packet. “… Even the Moderator of the PC(USA), Heath Rada, recently acknowledged that conservative churches are considering leaving the denomination because of the theological drift of the past 10 years; concerns over how the PC(USA) will find pastoral candidates who support the orthodox interpretation of Scripture; the denomination’s expenditure of funds; and the decline of membership.” 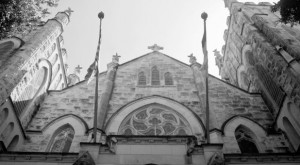 According to the ECO website, pastoral founders of the denomination worried the PCUSA’s growing denominational disputes over theology and bureaucracy stole focus from their pastoral calling of sharing the gospel of Jesus Christ and equipping a new generation to lead.

Earlier this year, 34,000 black churches broke ties with the PCUSA denomination for its affirmation of gay marriage.

Now, FPC is breaking ties with the PCUSA.

The decision packet to leave the church maintains the secession is about more than gay marriage, and acknowledges they have many LGBT members.

“We confess that we have not done what we should have done in ministering to our own members and families on this issue,” the packet reads. “Our humble understanding of God’s intention for sexual intimacy, as expressed through Scripture, however, is that sexual intimacy is to be expressed in a permanent covenant relationship between a husband and wife. While churches differ on this issue and people within our congregational family differ on this issue, we ask that persons who have different views remain in community, honor each other with respect and love, and stay centered on Jesus.”