Meriam Ibrahim Arrives in the U.S. 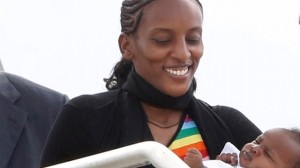 (WNS)–Meriam Ibrahim and her family arrived in the United States Thursday afternoon, ending the Christian woman’s 10-month battle to escape execution for her faith and join family members in America.

Ibrahim’s arrival in the United States—along with her husband and two children—comes nearly 10 months after Sudanese officials arrested her and charged her with apostasy for not adopting her absent father’s Muslim faith, even though she was raised by her Christian mother. The Islamist court sentenced Ibrahim to death by hanging after she refused to recant her Christian faith. Her sentence came just weeks before she delivered a baby daughter in prison.

An international outcry brought intense attention to Ibrahim’s plight, and the court eventually overturned her sentence. Sudanese police re-arrested her when she attempted to leave Sudan in June. Ibrahim and her family lived in the U.S. Embassy in Khartoum until Sudanese officials allowed her to leave the country on July 26—shortly after diplomats from Italy negotiated her release.

U.S. lawmakers who had called for a stronger push to help Ibrahim said Italy’s success in securing her freedom underscored tepid efforts by the Obama administration to advocate for the wife and children of an American citizen.

Wani—who was born in Sudan and became a U.S. citizen after immigrating to America—said U.S. Embassy officials in Khartoum were unhelpful when he initially approached them about his wife’s plight. At one point, the U.S. State Department questioned Wani’s paternity of the couple’s children, and suggested he take a blood test.

“I thought this would be the one place which would help me, but they told me they didn’t have time to do anything,” Wani told The Daily Mail in late May. “I was upset because now that I am an American citizen I thought they would help me.”

Italy’s deputy minister of foreign affairs, Lapo Pistelli, said he offered to help negotiate Ibrahim’s release during a visit to Khartoum in early July. The offer may have given Sudanese officials a way to respond to international pressure without handing U.S. officials a diplomatic victory: Sudan has a strong relationship with Italy but remains on the U.S. list of state sponsors of terrorism because of its ties to terror groups across the region.

During Pistelli’s visit, Sudan’s state-sponsored news agency reported on productive talks between the countries, “especially in the economic field,” and pointed out that Italy holds the current chairmanship of the European Union and “could play a great role for enhancing the role of Sudan in the regional and international levels …”

Even if Ibrahim’s release provided a temporary publicity “win” for Sudan, the country still faces well-deserved scrutiny for its severe human rights abuses and ties to terrorism. (The country’s president remains under indictment by the International Criminal Court for war crimes, and Sudanese military planes continue to bomb Christians in the Nuba Mountains.)

And if Ibrahim’s release is a partial win for U.S. officials who were under pressure to secure her freedom, the U.S. State Department still faces questions about why it didn’t push harder to help the condemned wife of an American citizen from the beginning of her plight.

For now, the true win comes for Ibrahim, her family, and the many who advocated and prayed for her release for months.

After arriving in Philadelphia, the family traveled to Manchester, N.H., to settle with Wani’s brother, Gabriel. Wani and a handful of family members came to the U.S. years ago after fleeing violence in Sudan. Many other Sudanese refugees also flowed into the area, and the Sudanese community in Manchester now numbers more than 500.

Members of the local Sudanese Evangelical Church plan to throw a party to welcome the family and to celebrate God’s answer to their many prayers for Ibrahim’s release.

“People are really happy to receive them when they come home,” pastor Monyroor Teng told AP. “It’s a miracle to me. I didn’t think that something like this would happen because in Sudan, when something happens like that, it’s unreal. … Maybe, who knows, I’m praying for [others] who are in jail and those who have died.”