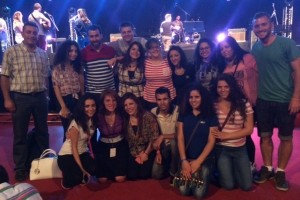 HAIFA, ISRAEL (ANS) — “Dancing together with Arabs? Laughing together with them? These are the people I hated my whole life,” says Chava, a Messianic Jewish girl who grew up in an Orthodox Jewish family in Israel.

At a time when murderous kidnappings, violent riots and a developing war in Gaza are bringing racial tensions to boiling point, these young Messianic Jews and Arab Christians arrived at the conference still reeling with all the raw emotions of the Arab-Israeli conflict.According to a story by David Lazarus for Israel Today, Chava was part of a three day gathering where she met with an estimated 1,000 Messianic Jewish and Arab Christian youth and young adults in Haifa.

“These young people came carrying a lot of hurt because of all the recent violence here in Israel,” said Rick Ridings, organizer of the annual Elav conference.

Israel Today said he added, “Many of them thought that they had dealt with these feelings, but because of the kidnappings and killings they are in pain, on both sides.”

For Chava, who grew up in an ultra-Orthodox Jewish ghetto, it was the first time to be in such close quarters with Arabs.

“I used to walk with my family to the Wailing Wall and pray that bad things would happen to the Arabs,” Israel Today said she recalled.

“We have this view that Arabs are bad people. But when I saw them praying to God, and heard them worshipping in Hebrew and then in Arabic, God touched my heart. These are the lost brothers and sisters I have been looking for all my life,” she said.

Ridings, who has been organizing these gatherings since 2007, was not sure that any of the young Arabs or Jews would even want to be together during such difficult times.

“I didn’t know if any of the Palestinian Arabs would even be able, or want to come,” Israel Today reported he said. “Yet almost miraculously, given the heightened security, about 50 Palestinian believers were able to come.”

“These were some of the most meaningful times I have seen at the conference,” Ridings told Israel Today.

He added, “Perhaps the situation forced these young people to get over the things that normally cause problems. This was real, not just some canned program.”

For many of the young believers this was the first time they had ever had a meaningful encounter with the other side.

Israel Today said when an Arab believer who grew up in Gaza and a young Messianic Israeli shared their testimonies, it helped others to open up and talk about what they really feel, sharing honestly about what had happened in the army, or with friends killed by terrorists.

“As I washed the feet of my Arab sister, I was able to ask forgiveness for the way my family, and my people, look at them (Arabs),” Chava said.

“To hear her say that she forgives me and loves me was so healing. It was the love from Yeshua, nothing else. I never had an Arab friend. Now I have daily contact with my sisters in Ramallah, Jordan and Lebanon,” she said.

“After hearing my story,” Israel Today said Chava continued, “an Arab girl came up to tell me that she hated religious Jews whenever she saw them. This was her first time meeting with someone who came from an Orthodox religious background. She ran to me and asked for forgiveness, and asked me to pray for her that she would have more love for my people.”

Ridings said that the vision for these gatherings is “to provide a safe environment for Jewish, Arab and Palestinian youth and young adults to have personal encounters with the Lord, to wait on him through worship and prayer, to grow in unity, and to be challenged to minister the Kingdom of God into every area of society.”

The conference concluded with a call for the young people to go and share the powerful testimony of what Yeshua can do for a broken world.