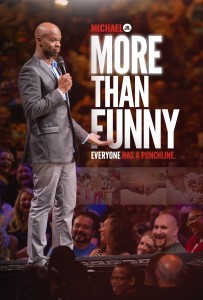 DENVER – Comedy often teeters on the boundaries of real-life. “Michael Jr.’s MORE THAN FUNNY” is a hilarious new comedy special from the only comedian who’s not trying to get laughs-Michael Jr. “Michael Jr.’s MORE THAN FUNNY” releases in movie theaters nationwide October 18. This one-night event will feature an exclusive introduction and post credit production with never-before-seen comedic segments and hilarious improv moments.

“I’m so excited about this comedy special-when we were filming people in the audience were crying from laughter one minute and laughing while crying the next,” said Comedian Michael Jr. “I think audiences will be surprised at what this event will stir up in them.”

Filmed before a live audience, “Michael Jr.’s MORE THAN FUNNY” features three real-life stories chosen to inspire and motivate cinema audiences. Through interviews and stand-up comedy, Michael Jr. takes you on a comedic journey in a way you’ve never experienced before. Michael Jr. has spent his career making laughter common in uncommon places like homeless shelters and prisons while inspiring his fans through sketches, stand-up, short films and appearances in feature films including the box office hit War Room. He is currently touring the country and has appeared on shows like NBC’s “The Tonight Show,” ABC’s “Jimmy Kimmel Live,” “The Late, Late Show,” BET’s “ComicView” and “CNN” among others.

Known as the comedian who is more than funny, Michael Jr. brings laughter and understanding to audiences all over the world. Often a keynote at fortune 500 companies, his versatility has landed him on TEDx Talks, Oprah, Jimmy Kimmel, and “The Tonight Show.” He is an author, producer, and is currently creating a new experience that will take people on a journey to finding more. With comedy as the vehicle, and purpose the destination, you will laugh in such a way that will inspire you to look inside and ask, “What am I called to deliver?”

Tickets for “Michael Jr.’s MORE THAN FUNNY” can be purchased online at www.FathomEvents.com and participating theater box offices.