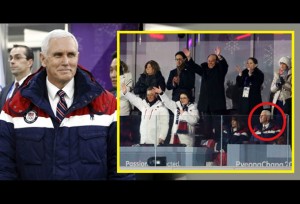 Undoubtedly, this was a very important moment in history, when North and South Korea entered the Olympic Stadium during the 2018 Winter Olympics Opening Ceremony in Pyeong-Chang, South Korea, as the two countries proudly marched in the Parade of Nations – under one Unified Korean flag.

And what did the US high representative do? He did a Kaepernick. He took a knee. Pence and his wife Karen were proudly sporting American colors, but are they reflecting American values? Exactly what about their vapid protest is patriotic?

If posed the direct question of whether or not peace is desirable for the Korean Peninsula, there is no doubt the majority of Koreans would say ‘yes’. And I believe it would be the case with the majority Americans as well. But Pence does not represent the majority view. Rather, he represents the radical minority views of Boeing, Raytheon, Lockheed-Martin, General Electric and the rest the wealthy defense lobby. He represents a bloated $1.1 Trillion ‘defense’ budget which has bankrupted the United States. That is the brand of patriotism on display, and the financial base that Pence is dog whistling to.

Effectively, what Pence and his wife are doing here is “taking a knee for world peace,” in a dutifully genuflection to naked imperialism.

Here, Pence is revealing the ugliest side of the self-serving American and transnational elite who have thrived on conflict and profited from the suffering of countless millions. That is what Pence is sitting down in solidarity for – the ugliest aspect of American society which is the unbridled war economy.

Cameras caught Pence in one of the most embarrassing public moments for US internationally – openly exhibiting behavior which is unbecoming of any bona fide statesperson. In terms of international relations, this should certainly disqualify this man from ever holding a chief executive position.

There is another disturbing possibility here though, which is that Pence knows something we don’t. Here we will pose the question: is Pence foreshadowing an US war with North Korea? We hope not.

Perhaps he is just incensed that peace is beginning to flourish on the Korean Peninsula, staving off any possibility of his benefactors opening up a new lucrative Asian conflict front. Pence might very well be devastated by the thought of the US having to evacuate Korea after nearly 70 years of a military occupation designed to prop-up a contrived North-South paradigm which was fueled and exacerbated by US ambitions in the first place.

We should point out Mr. Pence was outclassed by Kim Yo-Jung, the sister of the North Korean Grand Marshall Kim Jung Un. When American athletes entered the Olympic stadium, Yo-Jung stood up, as did the other Korean officials. That’s real statesmanship.

So in this instance, Kim Yo-Jung has shown more class than the sitting United States vice president. Let that just sink in for a moment.