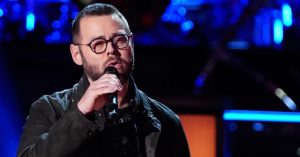 A Mississippi pastor and father of eight won the 18th season of NBC’s The Voice Tuesday, one night after his rendition of MercyMe’s I Can Only Imagine moved one of the judges to tears.

Todd Tilghman, the lead pastor of Cornerstone Church in Meridian, Miss., was named the winner over two other contestants in the final seconds of the show. He was surrounded by his family.

Because of the pandemic, the final weeks of this year’s series were filmed in each contestant’s hometown.  “I trusted completely in you guys, and in the goodness of God,” Tilghman said in a post-show Facebook Live video. “… It seemed like it worked out.”

Tilghman won a $100,000 cash prize and a record deal. He was coached by country singer Blake Shelton. Tilghman sang two songs in Monday’s show: I Can Only Imagine and an original song, Long Way Home.

His performance of I Can Only Imagine — which he sang in an empty church sanctuary — stirred Kelly Clarkson, one of the show’s four coaches. “You’re so moving, and it’s because you’re a pastor,” said Clarkson, who added she was crying during the song. “It’s because you have such a bigger belief inside of you than just yourself. I would love to come to your church to hear you speak. … You’re very special.”

Said Shelton after the performance, “You sing with such passion, such precision. You’re just a special dude.”

Tilghman, on Facebook Live, seemed surprised he won. “I still cannot believe it,” he said. “… I still don’t think I’ve wrapped my mind around the fact that I was even on The Voice.” He encouraged his fans to go on the social media accounts of the other finalists and “build them up.” He called them “phenomenal.”

Tilghman’s church has gone virtual during the pandemic. He preached from Matthew 7 on Facebook Live Sunday. His topic: the goodness of God. “There has never been a time that if my child asked me for bread, I would give him a stone or if he asked me for fish, I would give him a snake,” Tilghman said Sunday, drawing a parallel between the love of a parent and the love of God. “… The gospel has never been about how bad we are. The gospel is always about how good He is.”

Before he preached, he sang Elevation Worship’s Graves Into Gardens.