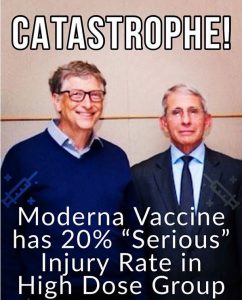 On May 18th Moderna put out a press release stating that they had seen positive results to the first phase of their COVID-19 vaccine trial. The news sent their stock prices surging, as the pharmaceutical company is working with Dr. Anthony Fauci and the National Institute for Allergy and Infectious Diseases which Fauci heads.

However, that all changed on Tuesday, May 19, 2020, when Stat News published an article stating that Moderna did not produce any data to back their claims.

“But was there good reason for so much enthusiasm? Several vaccine experts asked by STAT concluded that, based on the information made available by the Cambridge, Mass. based company, there’s really no way to know how impressive – or not – the vaccine may be.

“While Moderna blitzed the media, it revealed very little information — and most of what it did disclose were words, not data.

“Even the figures the company did release don’t mean much on their own, because critical information — effectively the key to interpreting them – was withheld.” (Source – Statnews.com)

Robert F. Kennedy, Jr. also published his own observation on the little bit of data that was disclosed via his Instagram Account:

“Moderna’s cheery press release this morning, the clinical trial results for its groundbreaking COVID vaccine could not be much worse.

“Dr Fauci was so confident of his shot’s safety that he waved ferret and primate studies (Moderna suspiciously reported no health data from its mouse studies.)

“That appears to have been a mistake. Three of the 15 human guinea pigs in the high dose cohort (250 mcg) suffered a “serious adverse event” within 43 days of receiving Moderna’s jab.

“Moderna did not release its clinical trial study or raw data, but its press release, which was freighted with inconsistencies acknowledged that three volunteers developed Grade 3 systemic events defined by the FDA as “Preventing daily activity and requiring medical intervention.”

“Moderna allowed only exceptionally healthy volunteers to participate in the study. A vaccine with those reaction rates could cause grave injuries in 1.5 billion humans if administered to “every person on earth”. That is the threshold that Gates has established for ending the global lockdown. Moderna did not explain why it reported positive antibody tests for only eight participants.

“These outcomes are particularly disappointing because the most hazardous hurdle for the inoculation is still ahead; challenging participants with wild COVID infection.

“Past attempts at developing COVID vaccines have always faltered at this stage as both humans and animals achieved robust antibody response then sickened and died when exposed to the wild virus.

“Moderna’s press announcement heralded “Positive Interim Phase 1 findings”. I have forwarded that claim to my colleagues in securities law; FTC rules restrict the amount of lipstick public companies may slather on bad donkeys.”

The U.S. Government has invested about half a million dollars in the Moderna experimental COVID vaccine so far.

On Thursday May 21st, while record numbers of Americans in the millions and climbing are without jobs, UK drug company AstraZeneca has announced that it has received $1.2 BILLION from the U.S. Government to receive 300 million vaccine doses starting this fall of a COVID-19 vaccine that is still in development and not even approved yet.

Dr. Slaoui is yet another Big Pharma leader Trump has added to his medical advisors with ties to Bill Gates, and has previously worked on vaccine development with his other medical advisors, including Dr. Anthony Fauci, Dr. Deborah Birx, and CDC Director Robert Redfield who all worked together with Bill Gates in the past to develop an HIV vaccine.

While the future of a COVID-19 vaccine is still uncertain, one thing is very clear: a vast majority of the wealth of the United States is being transferred to Big Pharma as thousands of businesses are now closing down due to the COVID-19 scare while the U.S. Government gives hundreds of BILLIONS (maybe over $1 TRILLION now??) to Big Pharma, for ventilators, face masks, hospitals and hospital ships, COVID-19 tests that are not even accurate, and the list goes on and on….