Modesty Is NOT Situational

Inconsistency is a dangerous habit for Christians to fall into, both for our own spiritual sake and because of the example we show to others through our lives. Sadly, modesty in what we wear is one of the areas in which it is easiest to fall into such inconsistency.

In the Bible, we see that God puts a lot of emphasis on making sure that we don’t become a stumbling block to others, to the best of our ability. This includes dressing in such a way as covers our nakedness, that does not expose our bodies to those who could more easily stumble if we didn’t dress modestly. Most Christians agree that such modesty should be a priority, and so we dress according to certain standards in our daily lives. 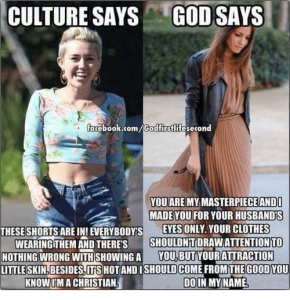 However, these standards are often either lowered or outright discarded in certain situations or during certain activities, like at the pool or beach, where most families wear swimwear that reveals more than they would ever consider showing with regular clothing; during weddings, when many brides and bridesmaids show far more skin than they usually would any other day; at school formals, where dresses are often more revealing than most of the other clothing in the girls’ closets; or at the gym, where tight yoga pants are worn by women who would otherwise only choose to wear loose-fitting clothing and men are equally likely to reveal more of their bodies.

Any situation can become someone’s “modesty exception.” Why do we put up with this in our lives? How do we justify this obvious inconsistency? I believe that we most often compromise our modesty standards by falling into one of two traps.

Sometimes, we slip into a “situation ethics” mindset, as if the activity is what determines modesty. We begin to think that what is immodest to wear day-to-day is not immodest for swimming/prom/etc. This line of thinking simply doesn’t hold up, logically or biblically. If we believe wearing a certain article of clothing could cause us to become a stumbling block in some situations, then it is a potential stumbling block in any situation. For example, underwear would be considered incredibly immodest attire anywhere outside of a person’s own bedroom and a stumbling block to those around… yet in the presence of a swimming pool or beach the same cut of material isn’t considered to be a stumbling block.

The Bible is not ambiguous in describing stumbling blocks and how we should avoid becoming such. It does not make exceptions or use qualifiers. In 1 Corinthians 8:13, Paul said he would give up eating meat completely rather than risk causing a fellow Christian to stumble. He didn’t say he would cut down on eating meat as often, or that he would restrict himself to eating meat only in certain settings. He said he would never eat meat so as to not become a stumbling block to a brother or sister.

Other times, we develop a defeatist attitude when modest options for a given activity aren’t immediately apparent to us. We resign ourselves to the fact that our culture just won’t accommodate our modesty standards, and so we settle for the most modest option of what’s readily available. We take a “lesser of two evils” stance and figure that’ll have to be good enough, consoling ourselves by looking around and saying, “At least I’m dressing more modestly than the majority of people.” The two implications here are that we’ve exchanged Biblical modesty standards for our culture’s modesty standards, and also, that modesty is defined by the majority. This line of thinking in no way excuses us when we dress immodestly.

First of all, we should never use the world’s standards in setting our own standards. Romans 12:2 exhorts us to be transformed by the renewal of our minds rather than conforming to the world. Additionally, in 2 Corinthians 6:14-18, Paul reminds us of the inherent difference of priorities between those who are slaves to Christ and those who are slaves to the flesh… our goals are intrinsically opposite. Whereas the world ultimately seeks self-gratification, we ultimately seek to love and serve God and to love and serve others. These conflicting goals and priorities will never agree on the same modesty standards.

Secondly, the only way we should be setting our standards is through careful Biblical consideration and prayer, never by listening to the majority. This principle is a foundational biblical truth. Throughout history, God has been proven time and time again to be the only reliable source through which we define our moral standards, and whenever God’s people started listening to the opinion of the majority over God’s standards, the results were always disastrous.

These are common pitfalls and it’s so easy for us to slip into these traps unintentionally, which is why it’s so important to be aware of them. Since it can be very easy to unknowingly slide into the world’s way of thinking that nudges us away from God’s will, we must be in a constant state of self-evaluation. We needn’t be paranoid… God’s grace does cover a multitude of sins. Yet we must still always be seeking to grow and improve and expand our understanding of God’s Word and His will.

Why do we place such emphasis on consistent modesty? Because we love God and we love others! We desire to obey God, and in His wisdom He showed us how important it is to look out for each others’ spiritual wellbeing. Dressing modestly is one way to put this principle into action in our lives. Let us strive and pray for God’s help to do so consistently!