By Rick Marschall
SWARTZ CREEK, MI (ANS) — Many generations ago, in the hazy origins of science and the scientific method, alchemy was a respected pursuit of the learned, the powerful, and the greedy. Turning “base metals” into “noble metals,” after all, was to seek a shortcut to gold; wizards and doctors seldom were invited to turn, say, daffodils into broccoli. In similar distant times, astrologers looked up rather than down, and charted the stars… and tried to reckon what they tell us.

Through the ages, as alchemists became chemists, and astrology gave birth to astronomy, humankind’s primal impulses broadened. But they have not gone away. For instance, although we (that is, the human race) recently have sent our mechanical devices to Mars and small, distant comets, a large percentage of our neighbors still subsist on horoscopes. The putative message in the zodiac consistently is in the first-five items people read in newspapers; on many dating sites it is impossible to cleanse one’s profile of your “sign.”

My friend Dan Rupple once led the Christian comedy troupe Isaac Air Freight, and I have always remembered one of his characters dismissing the zodiac and horoscopes as useless nonsense, mistaken, evil, and warned against by the Bible… “but I’m an Aquarian, and we tend to be skeptical.”

We believe, and we want to believe.

So with alchemy, we might think the Philosopher’s Stone and the Elixir of Life were rendered obsolete by philosophy, the scientific method, tummy tucks and Botox, but not so. Alchemy continues apace. Maybe not turning iron to gold, except as dross is discovered to have commercial uses.

But I often have wondered just how different the ways and means of old alchemy are from the development of hybrid plants and the genetic modification of our foodstuff. Gregor Mendel and Luther Burbank are regarded as benefactors of humankind. They did, frankly, with plants and animals, what wizards could not do with tin and bronze: a different sort of gold.

There are still genies, so to speak, and they keep escaping bottles. As we (that is, the human race) hurtle toward the logical extensions — GMOs, transplants, cloning, the “invention” of new species — we bid fair to become helpless spectators, like Mickey Mouse in the Sorcerer’s Apprentice. The Meyer Lemon is a cross between a true lemon and the mandarin orange. Tasty. The Cockapoo is a hybrid dog, the result of arranged marriages of cocker spaniels and poodles. Cute. (to some.) Pigs have been “bred” to be leaner, but now discriminating cooks and fans of gool ol’ pork fat are growing nostalgic.

So old scientists and new alchemists work at their business still, having generally given up on gold, they invent things as valuable as gold. To an extent, this is an affirmation that God creates and men fiddle. There are no new elements, apparently even on distant comets, and as the human race transforms things — even, in our minds, ruins or eliminates things — in fact the earth yields, accepts, and yields again.

If the physical realm is intransigent and malleable at best in the face of our efforts at transformation, a certain form of alchemy is still common amongst us, rife in fact.

Everyone practices it: we do not need lab coats or college degrees. If the “scientific method” prevailed, we would abandon it, for it has proven over and over and over and over again since the dawn of history to be a failure. Worse — dangerous and deadly. Yet we fool ourselves it is plausible, and has merit. And that we might be the first generation to find success in it; the first people to make it work. 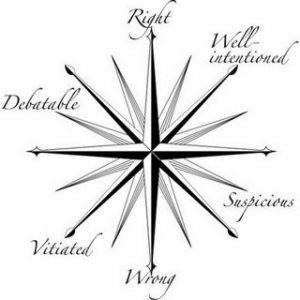 I speak of moral alchemy.

The world, generally — and I am afraid the church itself, lately — has tried to genetically modify the Ways of God. Of all the new theologies and versions of truth that are offered up, we can categorize many of them as the Loophole Gospel. The Word made safe for Modern Man. God created, but in our flawed hearts and misguided souls we try to create a different God. The loving Jesus required of us a modest yet meaningful life-choice, but people’s inclinations are to manufacture a different Christ, and His message modified to comfortably clothe our sins. The 10 Commandments have become 10 Suggestions.

“Woe to those who call evil good, and good evil,” it was warned in Isaiah 5:20, “who put darkness for light, and light for darkness.”

When you have a chance, rush to your Bible and read what God says in the entirety of Isaiah’s fifth chapter. “Woe” is the most extreme form of pity that can be felt toward those who suffer. Read what God says — He has laid out for us, His children, riches and promises of joy, yet we tend toward rejecting Him and toward our self-destruction. And toward His inevitable wrath! Again, do we think we are the first generation in history to turn up the “Get out of jail free” card?

“Therefore, as the fire devours the stubble, and the flame consumes the chaff, so their root will be as rottenness… Because they have rejected the law of the Lord of hosts, and despised the word of the Holy One…. Therefore the anger of the Lord is aroused against His people; He has stretched out His hand against them and stricken them, and the hills trembled. Their carcasses were as refuse in the midst of the streets. For all this His anger is not turned away, But His hand is stretched out still.”

Modern alchemy is a moral experiment, doomed not only to failure but reproach and disaster. Our sophisticated brains subliminally rejoice that we have developed a substitute for justice. New words, new excuses, new rationalizations for sin. An acceptable alternative to obedience… we hope.

In the process, contemporary man has achieved a sort of alchemy the ancient sorcerers never could approach. We have succeeded to transform the shining, precious gold that God offers each of us into cold, dull chunks of common iron that represents the inclinations of our evil hearts.

On the first of the year we usually make resolutions which last little more than the time it took to make them. Change can’t really take place until we admit our mistakes and ask God for forgiveness. That’s why God sent His Son Jesus into the world. For God so loved the world, that he gave his only begotten Son, that whosoever believeth in him should not perish, but have everlasting life. John 3:16 He understands your troubles and desire to change. He knows you want to follow Him. The scriptures teach, That if thou shalt confess with thy mouth the Lord Jesus, and shalt believe in thine heart that God hath raised him from the dead, thou shalt be saved. Romans 10:9

Jesus, please forgive my sin. I know I haven’t done everything that I should with my life and I regret it. I know that you died for me and that you have a plan for my life. Please teach me your ways and help me to follow you wherever you may lead. Amen

If you have just prayed this prayer for the first time or are renewing your commitment to take up your cross and follow Christ, please write to us and let us know so that we might pray for you in your new life.