More than 20 million in Africa, Middle East at risk of starvation 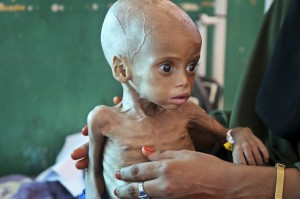 Acutely malnourished child Sacdiyo Mohamed, 9 months old, is treated at the Banadir Hospital after her mother Halima Hassan Mohamed fled the drought in southern Somalia and traveled by car to the capital Mogadishu, in Somalia Saturday, March 11, 2017. Somalia’s government has declared the drought a national disaster, and the United Nations estimates that 5 million people in this Horn of Africa nation need aid, amid warnings of a full-blown famine. (AP Photo/Mohamed Sheikh Nor)

(WNS)–Aid groups and government officials in famine-hit parts of Africa and the Middle East are calling for more global attention to a crisis that has left more than 20 million people at risk of starvation.

The United Nations earlier this month said the world is facing its worst humanitarian crisis since the end of World War II. More than 20 million people across conflict-hit regions in South Sudan, Somalia, northeastern Nigeria, and Yemen are at risk of famine and starvation. The rising needs and worsening conditions have left several aid groups and government officials scrambling for resources.

Benoit Munsch, a regional humanitarian coordinator at U.S.-based Care International, said the nonprofit provides aid to about 600,000 people in Somalia and South Sudan. Munsch said Care’s center in the South Sudanese town of Bantiu has seen an increase in recent weeks in families seeking aid and mothers so malnourished they cannot breastfeed their babies. Some regions of the Unity State in South Sudan have already declared famine, and many people are fleeing for neighboring Bantiu.

The South Sudanese conflict began in 2013 when a civil war broke out between President Salva Kiir and his former deputy, Riek Machar. The crisis left tens of thousands dead and displaced more than 2 million people. Resurging clashes in July 2016 resulted in even more people fleeing the country and blocked aid groups from access to people remaining in the war-torn region. Those areas have now declared famine, Munsch said. The United Nations said some 100,000 South Sudanese are already enduring hunger and another million people are on the verge of famine.

“We continue to welcome our neighbors in their time of need, but we urgently need the international community to assist as the situation is becoming increasingly critical,” said Ugandan Prime Minister Ruhakhana Rugunda.

World Concern, a U.S.-based Christian global relief agency, said it is responding to the drought in Somalia by giving cash to the most vulnerable families to buy food and is also providing nutritional supplements to children. Somalia faced a drought in 2011, and warmer El Niño weather conditions last year resulted in another drought that left some 6 million people in need of humanitarian assistance, according to the UN.

Chris Sheach, World Concern’s disaster response director, said the agency also is trucking water into the driest regions. But even the national reserves are starting to get low, he said. Sheach, who just returned a week ago from a trip to northern Somalia, said families fleeing drought are putting pressure on the communities most prepared for the drought.

“We’ve seen communities grow by five to ten times their population in the past year,” he said.

Gerald Anderson, an associate vice president with Save the Children, said the nonprofit’s employees in the Puntland region of Somalia have seen a significant increase in severe malnutrition cases among children. The agency received reports of children and families going days without food and some people feeding their livestock with cardboard just to keep them alive, Anderson said.

In Nigeria, Boko Haram’s insurgency has displaced more than 2 million people and left about 7 million people severely food insecure. The UN said some 450,000 Nigerian children are at risk of severe malnutrition this year, 90,000 of whom could die.

In Yemen, some 18 million people—two-thirds of the country’s population—are in need of aid.

“There is a closing window of opportunity to avert full-blown catastrophe and raise the money needed to save millions of lives,” Anderson said. “With no action, people may run out of food as early as next month and the crisis will escalate relentlessly.”