Most in the Vatican backed Hillary Clinton for president 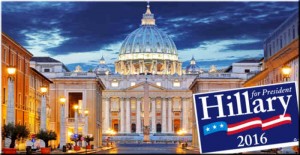 Now that the outcome of Election 2016 has been determined, guess where that leaves a participating Satan? Dumped flat onto his ever-going keester; stalled on the road for the time being and abandoned in the middle of nowhere, where he truly belongs.

The devil was not just in the details of Election 2016, he, like the Obama/Clinton/global elite, was giddy in the conviction he had guaranteed its outcome. So sure were they of their evil delivery of Obama’s third term through Clinton, the Clinton campaign had a mammoth fireworks display ready to roll after the count was in.

The only fireworks seen after the vote was counted were the sparks coming from Satan’s hooves being dragged along the pavement of the highway to nowhere as supporters tried to get him onto his feet again.

Now comes an aftershock, more powerful than those that follow an earthquake, but one that also serves as an indelible truth about the Power of the People when they rise up.

Some thought they saw the worst of Pope Francis when he defiantly aligned himself with Barack Obama on the lie that global warming is mankind’s biggest threat.

Incredible as it may seem, “during the U.S. election, the Vatican favored the Democratic Candidate Hillary Clinton, even though she is a staunch public defender of “abortion rights—i.e., the purported “right to kill one’s own innocent child.”

“As well-respected Vatican expert (Edward) Pentin put it: “…Corriere della Sera reported Nov. 10 that, according to its research, most in the Vatican were backing Hillary Clinton as the “lesser evil.” Trump, on the other hand, was considered “unelectable” due to his “aggressive chauvinism,” in addition to his threats to deport 11 million illegal Mexican immigrants and ban Muslims from immigrating to the United States.”

You read that right, “most in the Vatican” backed Hillary Clinton for election.

Like Clinton, Obama, Planned Parenthood, abortion doctors and all advocates of ‘legalized’ abortion, “most in the Vatican” seek to stifle the agonized screams of millions of babies painfully ripped from their mother’s wombs each year.

To the utter shame of the present-day Vatican, Donald Trump’s so-called ‘aggressive chauvinism’ is a bigger sin than wanton baby killing.

The good news is that an impressive number of Catholics ignored the Vatican, Francis, the antipope, and all parties named above by voting for Donald Trump rather than Clinton on November 8.

And there’s more: “Poll results have found that a majority of voters support the legislation known as the Pain-Capable Unborn Child Protection Act, a measure that would restrict abortions past the fifth month of pregnancy. (Breitbart, Nov.19, 2016)

“The survey’s results show that 64 percent of voters nationwide favor the Pain-Capable Unborn Child Protection Act, with 43 percent strongly supporting it. Additionally, 78 percent of millennial voters support the legislation, as do 67 percent of women, 70 percent of blacks, and 57 percent of Hispanic voters.

“While this legislation conjures sharp support and opposition on both sides of the issue, voters are about twice as likely to strongly support the measure (43%) than to strongly oppose the legislation (22%).

“The poll was conducted by the polling company, Inc.™/WomanTrend, a firm that was founded and run by Kellyanne Conway, President-elect Donald Trump’s campaign manager and a current adviser to the transition team. The survey of 824 voters was conducted on Election Day, November 8, 2016, at a Computer-Assisted Telephone Interviewing (CATI) facility using live callers. The poll’s margin of error is ±3.4 percent at the 95 percent confidence interval.

“In a letter published by the pro-life Susan B. Anthony List (SBA), President-elect Donald Trump pledged to sign the legislation into law. The letter contained four pro-life commitments, including one to eliminate Planned Parenthood’s taxpayer funding.

“Last year Donald Trump told CBN that the United States ‘should not be one of seven countries that allows elective abortions after 20 weeks. It goes against our core values,’” SBA List’s President Marjorie Dannenfelser said. “A majority of voters – including women, young people, Hispanics, and African Americans – agree.”

“Pro-life voters who were key to victory on election night are eager to see a pro-life White House and Congress address the horrific reality of late-term abortion in America,” she added. “We urge Congress to take up this legislation as soon as possible so that as many as 18,000 lives a year will be saved.”

“Kristan Hawkins, who heads Students for Life of America, the nation’s largest organization of millennial pro-life activists, told Breitbart News she is not surprised that the poll’s results show a high percentage of young people support ending late-term abortions.

“It’s no surprise millennials are the group most in favor of banning abortions after 20 weeks,” she explained. “They’ve grown up with ultrasound technology, seeing preborn babies clearly and undeniably human. This is yet one more reason why Planned Parenthood and the abortion industry are so out of touch with young people. They are pushing their pro-abortion agenda to a generation that has seen through their lies.”

“For the new Trump administration, signing the 20 week ban into law should be a top priority,” Hawkins added, “especially since this poll and others show that a significant majority of Americans agree that this nation should not allow this horrible practice of aborting babies who feel pain to continue.”

“A recent Marist poll also shows that eight out of ten Americans agree that abortion should be limited to — at most — the first three months of pregnancy.”

Meanwhile, the Vatican throwing in with the Obama/Clinton/global elite cabal during the hard-won election should not, in any way, lead to despondency and despair among Catholics, now that they know about the evil headquartered behind its walls.

Rather, they should ardently strive to use this latest shocking news to make their faith in Jesus Christ that much the stronger.

Good won over evil on November 8, and with strong belief in Christ, backed up by fervent prayer, good can return to win over and over again.