Mother claims: Flu shot caused blindness and multiple sclerosis after being forced to vaccinate by her boss 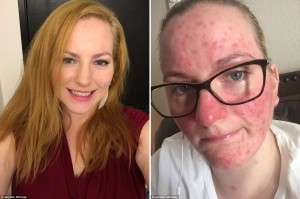 (NaturalHealth365) A 34-year-old mother of two was rendered blind in one eye for 10 months and diagnosed with a case of multiple sclerosis following a flu shot vaccination. Jennifer Whitney was forced by her employer to get the shot, then fired for missing work after her health complications arose.

Jennifer Whitney of Mukilteo, Washington is suffering from horrible flu vaccine side effects following the flu vaccination. In addition to MS and blindness, she has also experienced hair loss, the eruption of blisters all over her body and other unpleasant symptoms.

Doctors confirmed that the woman’s own immune system was attacking her nervous system and brain, leading to these debilitating symptoms.

While Ms. Whitney’s blindness in one eye resolved after 10 months, she still has multiple sclerosis, for which there is no cure. She is also unable to have any more children as a result of these medical complications.

There have been warnings circulating in the press that we are in the midst of “the worst flu outbreak in a half a century.”

Of course, this has prompted health officials to aggressively urge the population to seek vaccinations.  But, thankfully, there is increasing awareness that the flu shot is not only ineffective; it’s also quite dangerous for many people with mitochondrial dysfunction or low cellular energy.

Shocking, but true: Flu shot as low as 10 percent effective for many years

Jennifer Whitney’s two year struggle – since receiving the flu shot – is a case study in vaccine side effects and why we should be seeking natural remedies for flu. Her symptoms began just a few days after receiving the shot with an extremely bad headache along with severe dizziness – which progressed to much more severe complications.

The flu shot along with many other vaccines use aluminum as an adjuvant.  Aluminum, even in small amounts, can be highly toxic to the human system and is a likely cause of vaccine side effects to the brain and nervous system.

Seek natural remedies for the flu by supporting your immune system

With such a low effectiveness rate and such a high risk of vaccine side effects, we should seek out natural remedies for flu whenever possible.  And, the best way to do this is to support your immune system – throughout the year – so that it can protect us against the cold and flu season.

Taking the proper amount of vitamin D and C is a safe and natural way to defend yourself against colds and flu.  Naturally, eating lots of antioxidant-rich foods such as organic fruits and vegetables are a must.  Plus, don’t forget to maintain a healthy ratio of essential fatty acids in your diet to avoid excessive amounts of cellular inflammation.