By Jonathan Pincus
A contempt of Congress resolution against FBI director Christopher Wray and Attorney General Rod Rosenstein is reportedly being drafted by U.S. House Republicans.

The resolution, which House Intelligence Committee chairman Devin Nunes has instructed the committee to draft, reportedly claims that Wray and Rosenstein were complicit in stonewalling the production of material relevant to the Trump-Russia investigation, Bloomberg News reported Saturday. 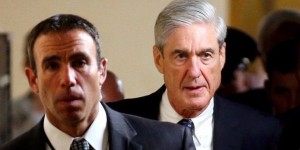 Nunes has demanded the Justice Department and FBI explain why they failed to reveal the reasoning behind special counsel Robert Mueller’s decision to oust a supervising FBI agent during the Trump-Russia investigation, the Washington Examiner reported.

Peter Strzok, a high-level FBI counterintelligence investigator was demoted to the FBI’s human resources department this summer after anti-Trump text messages between him and FBI lawyer Lisa Page were discovered.

However, Nunes claimed to have been made aware of Strzok’s reassignment only recently, even though roughly three months ago the committee had reportedly issued a subpoena that requested information regarding Strzok’s demotion, according to The New York Times.

According to the Washington Examiner, Nunes then requested information on Strzok’s reassignment during an Oct. 11 meeting with Rosenstein.

FBI officials then reportedly refused a request for information regarding Strzok during an Oct. 31 committee staff meeting. On Nov. 20, a request for an interview with Strzok was reportedly proposed by the committee.

Roughly one week later Nunes discussed Strzok’s demotion with Rosenstein, before the committee once again requested to interview Strzok.

However, on each of these occasions the DOJ and FBI reportedly did nothing. As Bloomberg News reported, actions such as the aforementioned have led Republicans, including President Donald Trump, to claim the investigation into Russian meddling a result of political motivation.

President Donald Trump tweeted Sunday that the revelation of Strzok’s demotion due to his supposed anti-Trump bias explained a lot about the FBI’s handling of former Secretary of State Hilary Clinton’s email probe.

“By hiding from Congress, and from the American people, documented political bias by a key FBI head investigator for both the Russia collusion probe and the Clinton email investigation, the FBI and DOJ engaged in a willful attempt to thwart Congress’ constitutional oversight responsibility,” Nunes stated Saturday.

Nunes has vowed to proceed with the resolution before the end of December unless the FBI and Justice Department meet the committee’s demands.

On Saturday, the Justice Department agreed to meet some of these demands, but Nunes didn’t seem pleased.

“The DOJ has now expressed — on a Saturday, just hours after the press reports on Strzok’s dismissal appeared — a sudden willingness to comply with some of the committee’s long-standing demands,” Nunes expressed in his statement Saturday. “This attempted 11th-hour accommodation is neither credible nor believable, and in fact is yet another example of the DOJ’s disingenuousness and obstruction.”

“We disagree with the Chairman’s characterization and will continue to work with congressional committees to provide the information they request consistent with our national security responsibilities,” Flores stated. “The Department has already provided members of (the House Intelligence Committee) and House leadership with several hundred pages of classified documents and multiple briefings — including for example clear answers as to whether any FBI payments were made to a source in question related to the dossier — and has more recently cleared key witnesses they have requested to testify, including Mr. McCabe, Mr. Strzok, and the alleged handler in question.”