During the three-day operation that began Feb. 11, the Cameroonian force freed about 100 captives held by the militants, including Nigerians and Cameroonians. Two members of Cameroon’s military were killed, including a senior commander. 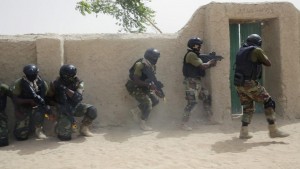 Nigerian special forces participate in an hostage rescue exercise at the end of the Flintlock exercise in Mao, Chad, Saturday, March 7, 2015. The U.S. military and its Western partners conduct this training annually and set up plans long before Boko Haram began attacking its neighbors Niger, Chad and Cameroon. (AP Photo/Jerome Delay)

“The town of Goshi in Nigeria was formally identified as one of the Boko Haram posts, hosting factories for the manufacturing of bombs and mines,” said Cameroon’s communication minister, Issa Tchiroma Bakary.

The town also served as a hub for holding the teenagers Boko Haram used for its suicide bombing missions, Bakary said. In the course of the attack, the soldiers dismantled four mine factories, burned down a training center and two vehicles, and seized at least five readied mines, hundreds of explosive holders, suicide vests, and triggers.

“Anything that can be regarded as a blow to Boko Haram, which will involve elimination of its resources for its terrorist campaign, is a good sign,” said Martin Ewi, a terrorism expert with the Institute for Security Studies in Pretoria, South Africa.

“The use of peacekeeping to respond to terrorism is not really an ultimate tool to combat and defeat terrorists such as Boko Haram,” Ewi said. “It would have to be combined with other counterterrorism strategies.”

Since the start of its six-year insurgency, Boko Haram has killed more than 20,000 people and displaced more than 2.1 million people within Nigeria. Attacks across Nigeria’s borders increased last year in line with the creation of the multinational task force.