If you want to go fast, says an African proverb, go alone, but if you want to go far go together. The Destiny Africa Children’s Choir, ranging in ages from 11to 18, brings this message home in a deep and meaningful way. Together, they emerge from unspeakable tragedy, extracting from the ashes a brand of music permeated with the irrepressible joy of a Hallelujah chorus.

Squeezing cozily together in passenger planes and 12 passenger busses, they transport their energetic choral music across the Atlantic Ocean, out of the dusty plateaus of Uganda, and into our schools and churches. This tight-knit band of singers soars over far more than the choppy surf of the ocean or the patchwork quilt of Kansas fields.

This multi-talented children’s choir has been touring in the UK, Belgium and the US for the past five years and delivers an amazing heartfelt experience of joy and hope! They have been blessed with many opportunities to perform at the United Nations, the Ugandan Embassy and more! In the US, they’ve performed at the Greater Hartford Festival of Jazz, The Boston & Brooklyn African Festivals, The Newport Yachting Center, the 2013 Hartford Women of Faith Conference and performed with four time Grammy Award Winners—Third Day!

War Has No Eyes

For those who have watched Ingrid Borgman’s vivid portrayal of Gladyss Alward’s missionary story in the weighty movie The Inn Of the Sixth Happiness, the idea of whimpering babies left on doorsteps by desperate mothers may have taken on a subtly cinematic overtone. Hollywood has 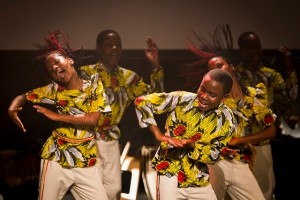 a way of dramatizing heartbreak, while at the same time inoculating us to the sheer agony which wakes many of our fellow human beings in the morning and roughly bids them goodnight.

In a country which relinquishes nearly one million adult inhabitants to the ravages of HIV/AIDS, these children once lived beneath the same roof as the omnipresent threat of death or abandonment. According to a sobering UNICEF report, Uganda houses 2.5 million orphans. This little, land-locked country is roughly comparable in size to Oregon. Uganda’s orphan population, straddling the abyss between starvation and utter poverty, could fill a city of abandoned children equal to the population of Chicago, Illinois.

A legacy of war also saturates the country. The rubble of villages once singing with life intersects with life-action snapshots of men, woman, and children whose wounded bodies tell the story of national cross-fire. War, observes a Swahili Proverb, has no eyes.

Yet, in what hymn writer William Cowper calls the “mysterious ways of God” uses a thing with no eyes to give us a choir of children whose joyful concerts help us to see Him again.

A Different Kind Of Gratefulness

In 2013-2014 as the orphans of the Destiny Africa Children’s Choir took their music across American cities, bumping along inside enormous, wide-windowed vans, they permeated the long miles with gladness far more refreshing than air conditioning itself. Smiles and songs filled the hours of travel. Far from being engrossed by iPhones or lost in the spaces between two ear buds, the children gazed wonderingly out the windows and wrapped loving arms around one another.

From the front seat, Mary Lou Lomantagne, the choir’s tour manager basked in the sounds of the happy laughter and singing jostling behind her. 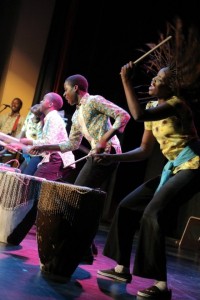 During a sweet, honest interview, she remembered, “It would be crazy. But these kids, there is patience, quiet, and respect. We put a CD on and the whole car began to sing. That is what we were doing while we were driving from point A to point B.”

During her time managing the choir’s tours, Mary Lou, a full-time marketing consultant, has witnessed remarkable renewal both within her own heart and in the audience sitting within earshot of the rhythmically throbbing drums.

“At first,” says Mary Lou, “I wanted nothing to do with the choir. I knew nothing about managing a tour.” But Mary Lou’s friend continued to prod her and finally, with trepidation, Mary Lou conceded. Mother of two of her own grown children, Mary Lou is accustomed to raising and interacting with children. But these Ugandan children, with their bright clothing and lithe bodies, exuded maturity and love mysteriously different than her previous experiences.

“I took one look at these kids and my heart grew as big as it possibly could,” Mary Lou says. “Seeing their faces, their eyes, and their smiles… they were human and real.” For Mary Lou, the children’s amazing escape from tragedy provides an elegant glimpse into the true meaning of victory and a childlike grasp of gratitude.

“These kids have such joy”, Mary Lou marvels.” They kept looking at me and smiling.” As a sign of respect, the children call her “Auntie.” To them, she is not a foreign lady with a wondrous head of brown hair. She is a friend, a companion, a wonderful member of their family. When asked where she thinks this gratitude originates, Mary Lou describes the children’s home in Kampala, Uganda.

Located in the safe region of Wakiso, just outside the capital city of Kampala, the Kampala Children’s Centre provides loving homes and shelter for some of Africa’s most at-risk children. The children living at the Centre, most of who are between the ages of 5 and eight upon arrival, escape hardships difficult for Americans to wrap their minds around. At first, the Centre housed children rescued from extremists known to force them into child armies, sex trafficking, slave labor, and brainwashing. As the political landscape shifts, so do the national challenges affecting children. Today, the Centre ushers through its doors orphans who otherwise could be living on the streets.

“They are exposed,” says Mary Lou, “to the whims of any adults who wish to take full advantage of them.” One or more children have been found in drainage ditches by local police and brought to the brick houses of the Centre. “Mothers who simply cannot have that one more child often leave them on the door step of the Centre”, Mary Lou shares. “Police and local inhabitants know that the Centre will help and often bring these little ones there.”

No longer subject to the scorching heat of the midday sun, the bitter cold of the Ugandan night, or the hateful touch of strangers, the children are welcomed into cozy, five-bedroom homes at KCC. Each home holds four bedrooms, three bunks, a clean bathroom and a house mother dispensing thousands of hugs.

The constant daily stream of mothers, fathers and grandparents bringing children to the Centre shuffle past a primary school. Should they peak into the windows, they would see rosy-cheeked scholars learning how to one day heal their country. Construction of a medical clinic is now underway. And in a well-worn music room, children practice their songs.

“This is a chance for them to be able to be a part of something that they would never have been able to fathom in the past.” If war has no eyes, than music sees through to the most beautiful parts of the soul.

“In 2007, one of the house moms was singing with the children,” Mary Lou retells. “This sparked an idea to start a children’s choir.” The opportunity to join the choir is open to all of the children. If they are interested, but do not have any special talents, they are still welcome to participate. As Mary Lou says, “Singing, dancing and the community spirit that they share has been a way for the children to heal. It is an opportunity for them to break through barriers and shine.” And shine they do.

In 2009, the Destiny Africa Children’s Choir spent their first tour in the United Kingdom, blessing thousands with their ecstatic songs. Dancing their way through many of their songs, the once-abandoned children praise Jesus with abandon. One instrument in particular captures the hearts of their audience, echoing the beats of the feelings left unsaid within them.

“The drums that the children play have gotten such an incredible emotional response,” says Mary Lou. “There is something very soulful about that sound.” Many of the songs they sing have been inspired by or written by the children themselves. “They create beautiful songs that express their past lives.”

The children are also looking forward, “When they come on the tour, they are happy to come to a new culture to learn, to try new foods, make connections, and to build relationships here that should be long lasting as [people] continue to sponsor them.

Many of the children, who look forward to a college education, long to be doctors so that they can return to their country and heal their families.

Listen to the Drums

Preparing to begin their 2015 tour in May, the DACC excitedly looks forward to performing. The search for venues continues. The choir’s goal, though, reaches far beyond monetary gain. “We are looking to open your mind to something different,” Mary Lou says. “Drums will wake people up. We have no idea in America what is going on. I lived most of my life not knowing much about Africa.”

Mary Lou informs us, “Our goal for the 2015 US Tour is to raise awareness for ongoing projects such as an on-site medical center, purchasing acreage for farming and additional housing. These projects are vital to the development of the children. We aim to provide an excellent education, good health care & optimal nutrition. Together, we continue to provide a safe and loving environment to these children who come from war torn areas, slums and AIDS affected areas.”

The Destiny Africa Children’s Choir invites you to be a part of their 2015 Tour. They are performing in RI and MA from May 4 to May 18 and again from July 19 to July 28, 2015. If your school, church, theatre, university, company or festival would be interested in booking the choir, please contact them now!!

With effort, today may be the day we begin to know about Africa. The joyful orphans of the Destiny Africa Children’s Choir cannot wait to teach us. War may have no eyes, but music sees through to the deepest parts of the soul. In our schools, churches, and businesses, let’s allow the little children to teach us how to see and sing again.

For additional information please visit www.destinyafrica.org. You can contact Mary Lou Lamontagne – Destiny Africa Children’s Choir US Tour Manager at 401-529-8910 or marylou@destinyafrica.org. Please see our ad for a list of local performances.