My Lord, Not Just My Savior

“Therefore let all the house of Israel know for certain that God has made Him both Lord and Christ — this Jesus whom you crucified” (Acts 2:36). 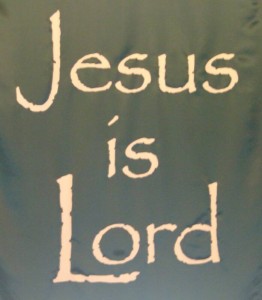 …and that no man can say that Jesus is the Lord, but by the Holy Ghost. 1 Corinthians 12:3

A lot of folks, it seems, myself included, refer to Jesus Christ as “Lord and Savior”…almost like the phrase comes as a package deal. “Lord and Savior” seems to roll off of the tongue with an acceptable piety. However, I wonder if the twice-mentioned phrase isn’t sometimes relegated in practice as nothing more than an alternative name. In other words, I wonder how often we stop and actually contemplate the terms within the phrase. “Savior” seems easy enough, and most have a ‘feel’ for it due to the profundity of salvation and eternal life. However, “Lord” is questionable…at least as I’ve seen it in my lifetime. Allow me to explain.

Lord (Merriam-Webster.com): 1) one who has power and authority over others; a) a ruler by hereditary right or preeminence to whom service and obedience are due; …d) obsolete: the male head of a household.

Do you find it interesting that “the male head of a household” entry has been made obsolete? I do. It makes sense because, as I see it, this world is being overcome by feminism. And before all you ladies get all up in arms, finish reading (btw, chances are that the very reason you may have had that inclination is that YOU have been conditioned to claw at masculinity whenever it is smack dab in front of you…but I’ll save that for another day).

Jesus Christ is the head of the household of the faith. He is the Head and we, the Church, are His Body. He is Lord. Our marriages are meant to be a reflection, “Wives, be subject to your own husbands, as to the Lord. For the husband is the head of the wife, as Christ also is the head of the church, He Himself being the Savior of the body. But as the church is subject to Christ, so also the wives ought to be to their husbands in everything” (Ephesians 5:22-24). Maybe someone ought to call Merriam-Webster and let them know that they obsoleted the ONE definition entry for “lord” that had the truest right to remain. I wonder what their response would be…maybe, “Tag that phone number and block it”.

You see, the degradation of the family structure is the mirror image of the degradation of lordship as a functioning aspect of sainthood. Except in churches like my own, which are rare nowadays, women wear the pants in the family. It’s obvious as the men shuffle around behind their wives like puppy dogs. I’ve had a few come through the doors, but they’re all gone now. These women choose the church, the times the family will attend services, and even which seats they will occupy on a regular basis. Think I’m imagining things???…take a close look around.

Lordship has been granted to women in most marriages. Feminism is trying to build another tower to Heaven as I write. Jesus Christ is between the crosshairs.

We are supposed to be subservient to our Lord. However, like the domineering wife in most marriages, we, His Bride, desire to rule over Him. Sure, we’ll publicly call Him our “Lord and Savior” but, in all reality, most of us trample Him, ignore Him, and even try to emasculate Him with our actions (many women do the same in marriage). He says, “Let’s do this, my love” and we say, “Not a chance, dear, we’ll be doing this other thing today…maybe later, if I decide we have the time”. How disgusting, right? Are you surprised given the erosion of respect in earthly marriages, even?

And don’t merely listen to the words being cast about, observe the activities. “You will know them by their fruits” (Matthew 7:16). Feminism is wise enough to cloak itself in a facade that’s palatable enough for most unconcerned Christians…but not me…and certainly not Jesus, my Lord.

True lordship, designed by God as a magnificent, beautiful thing, has been squashed by feminism (and a lack of masculinity)…even removed from our dictionaries. Just look at the average marriage now – be honest – who’s typically wearing the pants in the family? Who WANTS to and who doesn’t? Most men wear a disheveled ‘man-uniform’ without honor and dignity, so the primary culprit is man. Most men don’t even know how to dress themselves spiritually, never mind address their families as head of the household. Many are too busy donning sports jerseys or playing golf…only so much time in a day, right? Ugh.

In the absence of something to respond to, a woman’s own nature will take over. Some women have been burned so severely in marriage or by their own fathers that we’ve “lost” them for good, it seems…they are the “man-haters” as I’ve dubbed them, some more verbal than others. But nonetheless, respect for men is merely a formality to them, a maneuvering device they use now, hardly a heartfelt thing.

Most men are utterly disengaged so I’m not surprised by their absence of vigor. But Jesus Christ, my Lord and Savior is forever interested in His Bride and is FIGHTING for His rightful place as Lord, even today (hint, hint: this article – whose heart do you think I’m representing here???).

Corner a man over a beer on all of this and he’ll proclaim he is the “master of his domain”, but it’s just chest beating…he’s merely a shell in a football jersey that smells like beer and cigars…or maybe he’s the suit type – it doesn’t matter. It’s why he finds as many things to do OUTSIDE of the home as possible. “I work 80 hours a week!” they say…yeah, and why’s that? When your family needs you, you’re hiding out at your job…pretending you’re something you’re not. Ask his wife at the house and she might be kind enough to concur publicly (there’s that “formality”), but behind closed doors, she’ll be whipping him “back into shape”. Sadly, there’s often no longer a need for any “whipping” as most men willingly hand over the reins as soon as they walk through the door. I guess hiding out is exhausting…hmmm. I’m spiritually nauseated right now…can’t imagine what my Lord thinks about all of this.

The point of this article is simple. Most people love the idea of a Savior, but, truth be told, could do without the Lord part. As I say, it certainly does roll off the tongue with a pious reverence, albeit phony. And that’s typically where it remains, floating in the ether as something that no longer has a real home in our society (just ask Merriam-Webster, for starters). Most people have other gods and other lords they are far more interested in idolizing. For example, some folks get married JUST to be idolized. How’s that ever going to happen if they marry a person who’s already got a Lord?

Sure, most believers appreciate being saved, but by their actions they prove their infidelity to their true Lord, Jesus Christ.

God the Holy Spirit, the One I’m filled with right now as I bang away at this ergonomic keyboard, won’t surrender and neither will I!!! Jesus Christ IS LORD!!! He is my Master, yours too! He is “the MAN”! Real men stand up for what is right, beginning in their homes. We all are of the house of faith, where Jesus Christ, the King of kings and Lord of lords, is meant to rule our hearts. The sin of insolence is crouching at the door for you. Its desire is to rule over you, just like the woman desires to rule the man (teshuqa – Hebrew), but you must master it!

“Therefore I make known to you that no one speaking by the Spirit of God says, ‘Jesus is accursed’; and no one can say, ‘Jesus is Lord,” except by the Holy Spirit’” (1 Corinthians 12:3).

Is it fair to Him that many call Him “Lord” but treat Him like an awful wife treats her husband? Would it be more appropriate for most to just call Him “Savior”??? Food for thought…