My Thoughts On The Movie “American Sniper”

As did millions of other Americans, I went to see the hugely popular Clint Eastwood-directed movie, “American Sniper.” Here are some of my thoughts:

No one, at least not me, doubts the patriotism, courage, and sacrifice of our nation’s military personnel–especially our combat forces. I certainly do not share Michael Moore’s opinion that Chris Kyle (and the rest of our military snipers) was a coward. Snipers have been effective in helping to wage America’s wars since our War for Independence. In lawful combat, snipers are as needful as any other specialized fighting man.

My issue is not with Chris Kyle–or with any other American fighting man. My issue is with the justness of the war Chris Kyle was ordered to fight. Yes, I realize that we have an all-volunteer army; but let’s be honest enough to admit that the vast majority of our young people joining the U.S. military sincerely believe that they are doing their patriotic duty by volunteering to conduct war against America’s “enemies.” They learn nothing else from family, school, movies and television, and church. The singular message they hear is that everything the U.S. military does is right and righteous and that every military engagement is just and justified. I’m sure Chris Kyle was no different.

However, at the risk of sounding unpatriotic, after watching the real-life military exploits of Chris Kyle on the Big Screen, I left the theater extremely angry.

If those miscreants in Washington, D.C., want to invade countries that truly have Weapons of Mass Destruction (WMD), why don’t they invade Russia, or China, or Great Britain, or North Korea, or India, or Pakistan, or Israel? We haven’t heard the first word about the need to invade and occupy any of those countries. Why not? Each of those countries has known stockpiles of nuclear weapons. And when it comes to abusing human rights, most of the countries listed above have miserable records. But, no one from either party in Washington, D.C., even broaches the idea of invading and occupying (or even bombing) any of these nations. But we were told that the little country of Iraq posed such a severe and imminent threat against the United States that a military invasion was required. Everyone in the world now knows that was poppycock.

And for the benefit of my Christian readers, Saddam Hussein was one of the most tolerant and accommodating Muslim leaders in the entire region. Christian churches thrived under Hussein. For the most part, Hussein happily accommodated the exercise of the Christian religion in Iraq. He even had at least one Christian in his cabinet.

What has happened to Christianity in Iraq since the United States overthrew Saddam Hussein? Several recent reports have documented the fact that, for all intents and purposes, Christianity has been totally expunged from the country of Iraq. Christians have fled the country in terror due to intense persecution. There are no churches left in Iraq. This is AFTER the “liberation” of Iraq and the installation of a puppet government by the United States.

Secondly, as I watched the depiction of U.S. Marines going house-to-house kicking down doors and manhandling old men, women, and children, it occurred to me that these exact same tactics are now being employed by American police agencies against the people of the United States. Our so-called SWAT teams are nothing more than occupying military units on American soil. The strategies, philosophies, mindset, and tactics are exactly the same as soldiers in a war zone.

Thirdly, ask yourself these questions: what if, instead of the place being Fallujah, Iraq, the place was Kansas City, Missouri? Instead of the invasion force being the U.S. military, it was military troops from China, Russia, or North Korea? What if the occupying military snipers were killing American women and children instead of Iraqi women and children? Would we still consider them “heroes?” And would we act any differently from the Iraqi people who were simply trying to defend their homes and communities against an occupying foreign power?

When I left the theater, I was not angry with Chris Kyle because he happened to apparently be the best at what he was trained to do; I was angry with the politicians in Washington, D.C., who sent Chris Kyle into an unjust and undeclared war against people who posed NO imminent threat to the United States.

I am also angry with an American culture that seems to lack the discernment to recognize the difference between just and unjust war. I am further angered by ubiquitous U.S. propaganda against the Muslim people in general (especially by my Christian brethren).

It seems that hardly anyone recognizes that the power-elite are engaged in a global conspiracy to pit the Muslim nations of the Middle East against the West, and vice-versa. Our own CIA has manipulated the internal affairs of Middle Eastern states for decades. The CIA put Saddam Hussein in power. Where do you think those brand new hundred-dollar bills (in the amount of millions of dollars) stored between the walls of Hussein’s house, all wrapped in Bank of America wrappers, came from?

The CIA put Osama bin Laden in power. The CIA created Al Qaeda. The CIA created ISIS. And dare we even talk about the illegal drug-running operations that have been conducted by the CIA in both Middle Eastern and Far Eastern nations (not to mention Central and South America) for at least a half-century?

It might make modern Christian leaders feel morally righteous as they constantly stir hatred in the hearts of their followers against the Muslim people, but what it really does is demonstrate their utter ignorance as to who the real enemy is.

And for all of you who are scared silly about the threat of Sharia Law, I can tell you for a fact that there are numerous Christian preachers today who openly promote bringing America under the civil laws of Old Testament Israel. Yes, that means legalizing capital punishment for adulteresses, children who curse their parents, people who break the Sabbath (Who would define that?), people who are guilty of blasphemy (Who would define that?) homosexuals and lesbians, etc. If these preachers had anything to do with it, we Americans would suffer as much under their brand of “Christianity” as did the people of Israel under the Pharisees and as many who are currently suffering under the heavy hand of Islamic militants today.

And if you think there is religious liberty for the Jewish people in the modern state of Israel, you haven’t been there. Let a Jew in Israel convert to Christianity and try to publicly witness for his faith (in much the same manner as did the Apostles in the New Testament) and see what happens. The persecution is intense.

When I was in Israel, I preached in the two Baptist churches in that country. One was in Jerusalem; the other was in Bethlehem. What I discovered surprised me: over ninety percent of the Christians in those churches were not converted Jews; they were converted Muslims. And most of them were Palestinians. In fact, Christianity is growing exponentially among the Palestinian people, even as we speak. 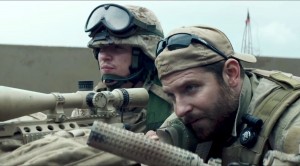 Christians who are constantly fear-mongering against Muslim people are playing right into the hands of the globalists who are using people of different faiths and cultures to inflame hatred and violence, thus creating the conditions for globalists to come to the rescue with their plans for world government. I’ve said it before, and I’ll say it again: The American people have far more to fear from Washington, D.C., than they do from Baghdad, Damascus, or Tehran.

As I left the theater, I was angry with a federal government that cares absolutely nothing about our brave U.S. military personnel. They send them to fight unjust wars only then to treat them like second-class citizens in our VA hospitals. If D.C. truly cared about our military personnel, they would never ask them to risk life and limb except for those times that are truly necessary for the safety and security of the United States.

And in the case of rogue militants who pose an imminent danger to the people of the United States, Thomas Jefferson and James Madison handled it constitutionally by asking Congress for a letter of marque and reprisal. Congressman Ron Paul introduced just such a bill following the 9/11 attacks. Had Congress followed the Constitution and passed Dr. Paul’s bill, much of the turmoil and unrest that currently exists in the Middle East today would have been completely circumvented. But, then again, the globalists would not have been able to inflame the world against each other like they have.

I am angry because, in the name of fighting the War on Terror around the world, the American people are quickly losing the liberties guaranteed in our Constitution’s Bill of Rights. And out of a misguided spirit of patriotism, the majority of the American people seem fine with it.

I am angry because our brave military troops are being asked to give their arms and legs and families and lives for the selfish, political, and economic interests of the ruling elite–and are also asked to take the lives of thousands of innocents in the process.

If you ask me, Chris Kyle was the victim of a sadistic and out-of-control federal leviathan that respects NOTHING. Not the rule of law. Not liberty–at home or abroad. Not family–our own or the families of other nations. Not constitutional government. Not national borders–our own or anyone else’s. And certainly not the sacredness of life.

Yes, I watched the movie “American Sniper.” And I left the theater angry.