Myanmar Readies for Election that Could Topple Army-Backed Government

(WNS)–For the first time in decades, citizens of Myanmar will cast ballots in the nation’s general parliamentary elections. The official in-country election is slated for Nov. 8, but advance voting is underway for nationals living and working abroad. In mid-Oct., would-be voters began lining up outside the Myanmar embassy in Singapore in the wee hours of the morning, snaking an impressive queue that stretched nearly a half mile and disrupted traffic. By Oct. 18, the overwhelming turnout prompted embassy officials in Singapore to extend the poll window by three days and cut off votes after the first 3,000 people each day.

If the embassy’s bursting seams are any indication, the people of Myanmar, also known as Burma, are eager to finally have a hand in shaping their nation’s future.

Although the election already has been riddled with confusion and concern, including voting roster abnormalities and the exclusion of ethnic Rohingya Muslims, it is still believed to be Myanmar’s best chance in years at a free and credible vote. The Buddhist-majority nation’s recent transition toward democracy is still haunted by a half century of brutal military dictatorship and a junta-era constitution. 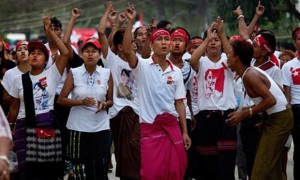 Myanmar’s current ruling power, the army-backed Union Solidarity and Development Party, is expected to meet defeat in the general election. Observers say The National League for Democracy, headed by Nobel laureate Aung San Suu Kyi, could easily gain a majority by forming a coalition with smaller parties. But Suu Kyi cannot lead the country. Her late husband was British and so are her two sons, triggering a constitutional provision that forbids anyone whose family has foreign citizenship from becoming president.

Despite Singapore’s packed-out poll station, the majority of Myanmar citizens scattered overseas remain voiceless in their home country’s historic general election. According to last year’s national census, Myanmar has 2 million citizens living in 37 countries, but just a fractional 30,000 are registered to vote.

According to a recent Reuters report, rights groups blame low registration numbers on bad bureaucracy, poor communication, and confusion about paperwork. For many of Myanmar’s migrants dotted around the globe, it is a logistical hurdle to obtain formal documentation required for voter registration.

“Many workers here have their passports taken away from them and kept by their employers,” Kyaw Thein, a Burmese worker’s rights activist based in Thailand, told Reuters.

According to The Myanmar Times, logistical confusion slammed poll stations in Singapore, South Korea, Thailand, and Malaysia as voters reported ballot envelopes with no ballot paper, registration lists from other countries, and not enough boxes to collect votes.

“I am supposed to cast four ballots as I am a member of an ethnic minority,” Ko Hla Soe Naing, a construction engineer in Singapore, told The Myanmar Times. “After queuing for five hours all I got was three ballot papers.”