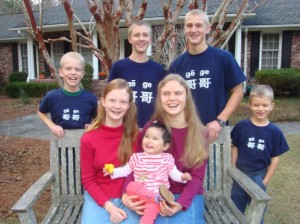 Caption: Rev. Doug and Kathy Forbes and their ten grandchildren wish everyone a safe, healthy and happy New Year!

It’s always fun to start your youth group session with a little mixer or game. The Name Game will grab your students’ attention and get them thinking. It can be played with a large or small group.

To play the name Game you need: young people, slips of paper, pencils and either a hat or a bowl.

Break your teens into two groups and ask each young person to write three famous names on separate slips of paper, fold all three and place them in the hat or bowl. The names can be from history, current culture or even cartoon characters.

For the first round, have one person on the first team pick a slip from the hat and describe the name to their team with as many words as they want. (Of course they can’t say the actual name.) If the team can guess the name within one minute, they win a point and another person on their team can draw a name from the hat. When the minute is up, the other team has a chance to do the same. Continue going back and forth between teams until all the names have been used.

The second round begins when the hat is empty. Place all the names back in the hat. A person on the first team draws a name as before, but this time only one word can be used to describe the name.

The third round repeats the process as before, but now the person drawing the name can only act out the name, as in the game Charades. The team with the most points at the end of the game wins. Hopefully this game will bring your group laughter, fun and sense of community.