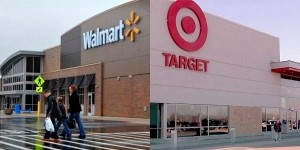 (WND) If Santa Claus is preparing a list of who’s been “naughty and nice” this year, some companies are going to be getting a lump of coal in their stockings for the smut they’ve been sponsoring on television.

And according to a new list created by the Parents Television Council, some of their direct competitors can expect a candy cane in their stocking instead for being attentive and conscientious about how they spend their advertising dollars.

Walmart, for example, made the PTC’s list of 2014′s best advertisers, while fellow retail giant Target landed on the worst advertisers list. Similarly, clothing retailer TJ Maxx can expect good things from Santa, while Old Navy, the PTC says, should be expecting coal.

Melissa Henson, director of grassroots education and advocacy for the PTC, told WND how the lists were compiled.

“So what we base the best advertisers list on instead is which companies have been responsive, have been receptive to the idea of reevaluating their ad buys,” she continued. “We are looking at companies that might have been on an especially bad show, but after we contacted them they pulled out of that show. Or companies like Proctor & Gamble or Walmart, which affirmatively speak of their interest in helping promote family friendly programming. They went together and helped create some family friendly shows to put their sponsorship dollars behind a few years back. These are companies that proactively look to create more family friendly entertainment.”

“The companies on the worst list are companies that we have made an attempt to reach out to about their ad buys, about their ad placements, and they have been unwilling to reevaluate or even really engage in any kind of dialogue about their sponsorship behavior,” Henson explained.

But rather than suggesting consumers place these advertisers on boycott or “boycott” status, the PTC separates the two lists into those companies that have shown themselves to be “family friendly” with their advertising policies and those that “need encouragement.”

“At the PTC we don’t call for boycotts, but what we would like to see is folks letting advertisers know, ‘I am taking my business to this competitor and this is why I am doing it, because I am not happy about the programming that you are making possible with your ad buys,’” she explained.

The PTC website summarizes,”We often say that what TV shows advertisers spend their money is a reflection of their corporate values. As consumers, where we shop is also a reflection of our values. By ‘voting with your wallet,’ you are supporting the companies that make programming safe for your children or grandchildren and also sending a message to the companies that are helping to underwrite some of the worst content on television.”

Caption: Retail giants Walmart (on the best list) and Target (on the worst)