A coalition of military servicemen is suing the Tokyo Electric Power Company (TEPCO), which operates the devastated Fukushima Daiichi nuclear power facility in Japan, for injuries they sustained in the days following the massive earthquake and tsunami, which triggered three reactor core meltdowns.

One of these servicemen is Steve Simmons, a 17-year Navy veteran who says he sustained debilitating injuries after being called to provide aid following the disaster. Simmons, who served aboard the USS Ronald Reagan, claims that he lost the ability to use both his arms and legs, and that his hands are now “barely functional” due to radiation exposure. 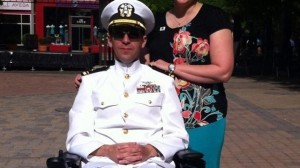 Simmons and others have attempted to report these injuries to their superiors, as well as to doctors who insist that the symptoms are all just “psychological” in nature. Needless to say, nothing has been done as of yet to address the problem, which is why Simmons has joined onto a lawsuit with at least 111 others seeking monetary compensation.

“[In] November 2011, I noticed something was wrong,” stated Simmons during a recent interview, as quoted by ENENews.com. “The black-out was the first thing… I started dealing with gastrointestinal issues, at first I thought I was coming down with a stomach bug… Fevers as high as 102.9°F… January 2012 was the first time I was hospitalized… [They] sent me home with a sinus infection.”

“Three days later I was readmitted to the hospital because my lymph nodes were swelling… that’s when my legs buckled and the muscle weakness started to onset… it’s been ascending from legs, trunk, arms, hands… I can’t really use the muscles much at all.”

Beyond all this, Simmons says he can barely sustain about 20 pounds of grip strength and has to use a catheter every four hours just to empty his bladder of urine. He also suffers from constant migraine headaches, fevers and an extreme vitamin D deficiency that he has been unable to remedy thus far.

“Nobody can figure it out,” he added. “I’ve been getting these rashes that come and go; they’ll go up my arms, my neck, around my eyes, back, stomach, legs. I deal with tremors and spasms… I am [in a wheelchair]…. There’s days I don’t even get out of bed.”

Initially, Simmons believed himself to be the only person suffering from these obvious signs of radiation poisoning. After all, this is what his doctors had repeatedly claimed. But he later learned that hundreds of other servicemen were also suffering from similar symptoms, and that the problem was much worse than the government had been letting on.

Simmons told Nuclear Hotseat host Libbe HaLevy that his military friend had been admitted alongside him at the same hospital, Walter Reed, with almost identical symptoms. Both men were told to keep quiet about their symptoms, and doctors actually tried to convince both of them that their radiation damage was purely psychological.

“We now realize how bad it was,” Simmons explained, adding that Fukushima is “the worst disaster in history.”

“I would have to be naive to think that nobody else is going to pass away from this — it’s only a matter of time before there’s more lives lost. I would be lying if I don’t think every day that I’m going to be next because of how bad my health keeps going downhill.”

According to Nuclear Hotseat, 112 Navy sailors are demanding that TEPCO set aside a $1 billion fund to cover medical expenses for injuries resulting from the disaster.