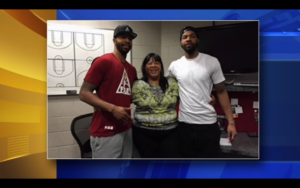 The powerhouse siblings, who’ve been playing in the NBA for six seasons, spread holiday cheer to Philadelphia residents by paying off $6,000 in layaway orders at a local Walmart. The Morris brothers chose the Northeast Walmart on Adams Avenue in Philadelphia because that is where the athletes grew up. Markieff and Marcus were raised by their single mother, Thomasine Morris, in a neighborhood near that Walmart location, they told WPVI.

On Monday, customers walked into the store for the final day of layaways when they found out that the Morris twins had paid off their outstanding bills. “God bless them. God bless them!” local resident Roberta Williams told WPVI. “It’s wonderful what they are doing for the people.”

Unfortunately, the 28-year-olds weren’t able to share their Christmas generosity in-person due to their basketball schedules, so their mother stepped in and made the special delivery on their behalf. “It’s a blessing to be able to give people anything,” Thomasine Morris said, adding that even though her sons “play in Boston and in Washington, Philly is still our family.”

The proud mother recalled being a single parent wanting to give her children gifts on Christmas. The brothers are known for writing about their faith on social media, and in a recent post showing the two of them together, Marcus gave all the credit to God.