NBA’s Most Valuable Player Stephen Curry a Shining Light for Jesus, On and Off the Court 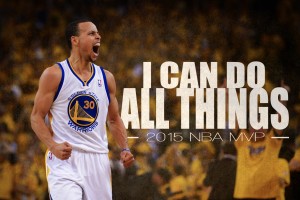 Stephen Curry, who picked the lock to Cleveland’s defense to win the NBA championship, likes to point people to “the Man who died for our sins on the cross.”

Curry was named the NBA 2015 most valuable player and led the Golden State Warriors to the championship, but he said worldly prizes don’t compare with Heavenly ones.

“I know I have a place in Heaven waiting for me because of Him, and that’s something no earthly prize or trophy could ever top,” Curry told Fellowship of Christian Athletes.

LeBron James seemed to be willing his way to the championship for the Cleveland Cavaliers, without two of his supporting stars who were injured. Curry was floundering with low points as the finals initially favored the Cavaliers 2-1.

Then Curry, 27, started dropping his trade-mark, high-arched three-pointers. When double-teamed, he would make miraculous passes. And for the rest of the finals, the Cavaliers played a futile game of catch-up as the Warriors won each of the next three games to clinch the championship.

Curry was 13 when he accepted Jesus as his Savior. “It was a big decision that my parents couldn’t make for me,” he said. “It’s been a great walk since then. He means everything to me.”

With Christian humility at the MVP ceremony, Curry showed up void of all the mad-dogging swagger of other superstar ballers. He credited his wife for being his “backbone” and his parents for teaching him that studying and washing the dishes were more important than basketball. 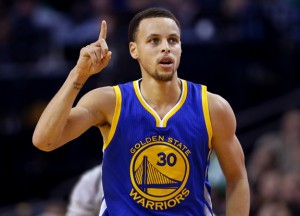 Golden State Warriors guard Stephen Curry heads down the court after making a three point shot during the second half of the Golden State Warriors 106-101 win over the Boston Celtics in an NBA basketball game in Boston, Sunday, March 1, 2015. (AP Photo/Winslow Townson)

“First and foremost, I have to thank my Lord and Savior Jesus Christ for blessing me with the talents to play this game,” said the 6’3”,  190-pound point guard. “I’m His humble servant right now, and I can’t say enough how important my faith is to who I am and how I play the game.”

Steph – as he’s called by his teammates – was raised in Charlotte, NC, the son of a 16-year NBA veteran. He had a brother and a sister. His mom was something of a Christian disciplinarian, keeping the sports-obsessed boys on track with firmly established priorities.

“How we did in school growing up was important,” he said. “If we didn’t handle that business, there were no privileges. I remember sitting out my first middle school game because I didn’t handle my stuff at home. That was a pretty embarrassing moment if you go to your first middle school game and you have to tell your fellows, ‘Hey, I can’t play tonight. I didn’t do they dishes at home.’ That lesson taught me there’s more to life than basketball.”

His rise to prominence was unlikely. He was told he was too short, too lightweight, not physical enough. His high school had only moderate interest in his play. But Curry ignored the criticism and focused on what he could do. He developed an exquisite sharp-shooting touch that eventually silenced critics and left opponents shaking their heads.

His Under Armour gear is trade-marked “4:13” from Philippians 4:13: “I can do all things through Christ who strengthens me.”

At Davidson College in North Carolina, he led the Wildcats on consecutive NCAA title runs. After his junior year, the Warriors drafted him in 2009.

The one finger credits Jesus.

In the summer of 2013, Curry joined a mission trip to Tanzania. He donated 816 mosquito nets to African refugees to fight against malaria. He calculated the unusual number of nets by multiplying by three the number of three-pointers he had scored the previous season.

Not only does Curry lead his team on the court, he leads them off the court with his Christian example. Most of the players are Christians. They attend chapel before every game. Their devotion to Christ is so note-worthy that the San Jose Mercury News called them “choirboys.” 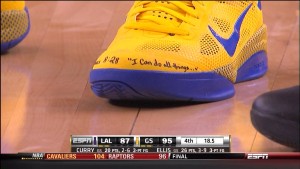 “The Holy Spirit is moving through our locker room,” he told Breaking Christian News. “It’s allowing us to reach a lot of people, and personally I am just trying to use this stage to share how God has been a blessing in my life and how He can be the same in everyone else’s.”

The ever-cool, baby-faced three-point-maker keeps improving, looking to extend his basketball legacy and all the while shine his light for Jesus.

“Basketball has always had a special place in my heart,” Curry said. “And being saved is a great feeling. There are so many things we have to overcome in this life. Jesus, through his work on the cross, has paid the ultimate price for us. I’m proud to be a child of God.”