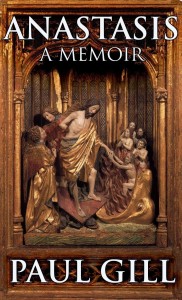 NAPA COUNTY, Calif. – 22-year-old Paul Gill was an atheist who loved to rail against Christianity. He was also a hard-partying alcoholic who regularly spent his nights and his paychecks in the local bars. In October 1998, after going almost a week without sleep while high on crystal meth, Mr. Gill was suddenly overcome by a vision of hell that lasted for two days and changed his life forever. Now, almost seventeen years later, his new book “Anastasis: A Memoir” describes in terrifying detail what he saw. It also chronicles his journey from addiction to sobriety, and from atheism to an acceptance of Jesus Christ as his Lord and Savior.

As modern Christian churches collectively rethink their position on hell (“What If There’s No Hell?” Time Magazine cover story, April 25, 2011), Mr. Gill’s testimony may give them pause. Though many will deem his experience a mere hallucination, meth addicts continue to report an energy of evil attached to the drug and infecting those held in thrall to it. They claim to have seen demons, and in Mr. Gill’s opinion they might not be wrong. The crystal meth epidemic has turned “meth madness” into a household term, but few coherent records exist explaining what this experience is actually like, from the sufferer’s point of view. Author Paul Gill provides a much-needed subjective account of this phenomenon at its worst, and his may be the most comprehensive available. It will be up to the reader to decide whether the nightmare that transformed him was real or imaginary.

“The most important part of the book is not the vision of hell, but what happened afterward,” says Mr. Gill. “God worked miracles in my life, and I hope that my story can serve as an inspiration to Christians everywhere. In my darkest hour I called upon Jesus, and he answered me.”

Told with emotion, wit, and philosophical vigor, “Anastasis: A Memoir” by Paul Gill addresses the eternal questions with the exuberance of the born-again, and is a wild adventure from darkness into the light.

“Anastasis: A Memoir” eBook is currently available free of charge on Kindle or at Amazon.com.