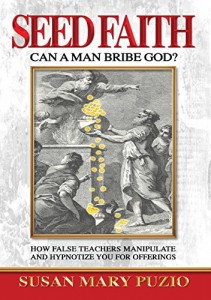 The name of Jesus Christ is used as a ruse to get into the pocketbooks and bank accounts of viewers who drink the Kool-Aid of false promises of attaining wealth and riches, while the only ones getting rich are the televangelists.

After all the public scandals of Christian celebrities like Jim and Tammy Baker and Jimmy Swaggart, it is hard to believe that people can still fall for the trickery of fast-talking con artists. They bear no resemblance to Jesus of Nazareth who warned that it is nearly impossible for a rich man to enter into Heaven. But most Christians do not know their Bible and that is what the greedy manipulators are counting on.

In her compelling new book, “Seed Faith: Can a Man Bribe God” Susan Puzio takes on the deceivers who manipulate the viewing public for the sake of filthy lucre. Using Mafia-style tactics, they tell you that you must pay God off by sending them money or suffer the consequences.

Has their day of reckoning come? Miss Puzio details the fall of the Oral Roberts family, whose seed faith scam was adopted by others in the business to get and to keep the pledges coming in. The legacy of Oral Roberts was left in shambles under the administration of his son Richard Roberts. The younger Roberts put ORU (Oral Roberts University) into the red by about 50 million dollars, so apparently seed faith did not work for Richard and Oral. Also, the bankruptcy of Paula and Randy White’s former ministry Without Walls in Tampa, now truly “Without walls” since both churches in Lakeland and Tampa were bulldozed and are in foreclosure.

Miss Puzio gives many other examples of the dangers lurking on Christian television. She spent 15 years working in Prosperity Gospel circles before recognizing the insidious nature of its leaders.

Susan shares her unique perspective of the selfishness and greed that still prevails today in much of so called “Christian” television. Chapters include Paul and Jan Crouch of TBN, Marcus and Joni Lamb of the Daystar network, Rod Parsley, Mike Murdock, Ken and Gloria Copeland, Morris and David Cerullo, Wendy Alec of God TV, Benny Hinn, Juanita Bynum, and many others.

“Seed Faith, Can a Man Bribe God” is available on Amazon, Lulu, Barnes and Noble and the Kindle version is also on Amazon. The author is available for interviews and can be contacted at susan@propheticnews.com.

Susan Puzio hosts a weekly radio program on Blog Talk Radio, “Prophetic News,” that can also be heard on iTunes on the Rapture Ready Radio Network.