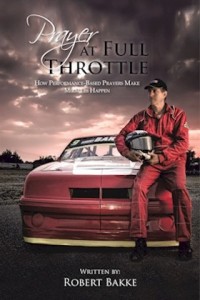 GOLDEN VALLEY, Min. – The breakthrough new book “Prayer at Full Throttle” rocketed into Amazon’s Best Seller category. This refreshing new look at prayer benefits the reader by presenting God as a “powerful best friend” as opposed to a religion, breaks the reader free from their fear of what other people think, then redirects them onto the path they were designed and built for, which is the path where miracles will begin to happen. The book includes photos to prove it.

“God works through people, and He will, provided you get to work, first,” says Bakke. “The book introduces Performance-Based Prayer, which is based on ‘earning’ your blessing or miracle,” says Robert Bakke, who then adds, “While this thought gives some theologians a toothache, the fact remains that when we put action behind our prayers, miracles are more likely to occur.”

Why performance-based prayer? The New Testament is clear that “faith without works is dead” (James 2:20). According to Bakke, “For some people, the word ‘works’ is clear enough, but my favorite works-related term is the word ‘performance’ because in its various Biblical contexts ‘performance’ is defined as: rise up, commit, endure, accomplish, battle, finish and succeed.”

“Take David, for example,” says Bakke. “David didn’t just sit quietly in his fight against Goliath. The exact opposite occurred. God worked through David when David ‘spoke’ words of faith, ran towards Goliath, twirled his slingshot and fired a rock. That’s performance, and performance opens the door for miracles. Prayer at Full Throttle unlocks that door.”

Robert Bakke is a jet captain and aerobatic flight instructor; a black belt, karate instructor and regional champion; a ski instructor; a race car driver; a best-selling author, and was running a multi-million dollar company by the age of 24. After shattering numerous sales records, Bakke eventually saluted good-bye to his business career and moved on to captain jet aircraft and teach the “performance” of God’s Word. He received his Certificate of Ordination as a Minister of the Gospel on April 15, 2012. Bakke is available for interviews and appearances.