PARK CITY, Utah – A new nine-part documentary from Revealed Films, “Christ Revealed,” explores the scientific evidence for the resurrection of Christ. Featuring top Christian apologists and historians and filmed on-location in Israel and across America, the docu-series is an epic journey of revelation about the truth of one of the Bible’s most controversial claims.

The resurrection of Christ has long fascinated the world, and it has been the focus of many movies and television series including “The DaVinci Code” and History Channel’s “The Bible.” However, over one-third of Americans are unconvinced of the resurrection’s veracity, according to Rasmussen Reports. 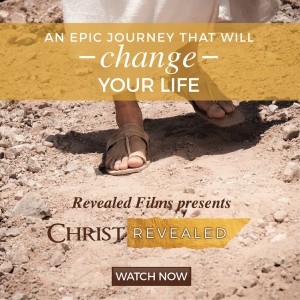 “The Resurrection of Christ is one of the most discussed events in history, and it is the cornerstone of the world’s largest religion,” said Jeff Hays, director and executive producer of “Christ Revealed.” “While Christians believe in the resurrection in faith, we wanted to see what scientific evidence was out there to support whether this event occurred.”

The series is produced by the award-winning David Brookwell, who has produced projects such as “Soul Surfer” and “That’s So Raven!” Releasing Nov. 9, the series will be available exclusively online at www.ChristRevealed.com. Viewers who register on the website will be able to access the full series for free for a period of nine days.

“Through discussions with leading Christian thinkers, we explore the history, evidence and inspiration of Jesus Christ,” said Patrick Gentempo, host of “Christ Revealed.” “The project is epic in scope and covers Jesus’ life from birth to resurrection.”