By Jennifer Willingham
NASHVILLE, TN — Dirt track racing churns up drama in the new faith-based film CHAMPION, releasing theatrically May 19, 2017 from Brannon Pictures, produced by support from First Baptist Church Woodstock, GA. Plumbing the depths of topics such as forgiveness, fatherhood, foster parenting and the power of second chances, CHAMPION depicts race car driver Sean Weathers’ journey following a tragic on-track accident that rips apart his family, leaving him vulnerable to the last person on earth who should help him. 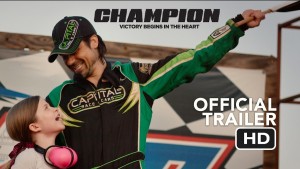 Director and producer Judd Brannon sees the adrenaline-fueled plot of dirt track racing as a unique advantage for CHAMPION. “I saw the community and family involvement in the dirt track industry and felt it would be the perfect setting to provide both excitement and a family-centered focus.”

First Baptist Church Woodstock, GA, and Pastor Johnny Hunt supported Brannon from the beginning. Hunt, former president of the Southern Baptist Convention, has been involved with racing as a chaplain for Dixie Speedway for 25 years.

The heart of the story is in its theme of forgiveness. “The film tackles forgiveness in a way that is very creative,” said Hunt. “In CHAMPION, the viewer sees the need for forgiveness but doesn’t imagine how it’s going to happen. Then, all of a sudden there’s a ‘wow’ moment.”

Another theme woven into the film is foster care, and the important work done by families who feel called to this unique ministry. Brannon and his wife have been foster parents for years, and wanted to bring attention to the impact that fostering a child can have in the lives of vulnerable children.

“The driving force for the plot was my desire to reach people with the love of Christ,” said Brannon.

Synopsis: Racecar driver Sean Weathers was at the top of his game…beautiful daughter, top sponsors, the best crew money could buy and an ego that trumped them all. Just weeks before ending the best season of his life, he was in control-or so he thought. When a grudge series with another racer turns personal, the ego and arrogance that propelled him to the top causes a tragedy that sends his life spinning.

Jack Reed was successful as a businessman, but he struggled as a father. Just when they were reconnecting, he got the news his only son Ray was dead. Through his grief, Jack discovers the truth that Ray had wanted to share with him, that the road to understanding and peace would have to begin with forgiveness.

Andrew Cheney (BEYOND THE MASK) stars with Gary Graham (Star Trek “Renegades,” ALL THE RIGHT MOVES) and Robert Amaya (COURAGEOUS, MOM’S NIGHT OUT). Directed by Judd Brannon (WAR ROOM), the film is produced by Brannon Pictures.