By Good News Today staff
ARDEN, N.C –  An experienced Christian filmmaker plans to release a dramatic film this fall which he hopes will be an excellent discussion starter on the creation-evolution debate. 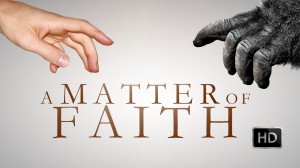 A Matter of Faith

A MATTER OF FAITH, directed by Rich Christiano, and produced by the Christiano Brothers, will hit selected theaters nationwide beginning in October.

A Christian girl, Rachel Whitaker (Jordan Trovillion) goes off to college for her freshman year and begins to be influenced by her popular Biology professor (Harry Anderson) who teaches that evolution is the answer to the origins of life. When Rachel’s father, Stephen Whitaker (Jay Pickett) senses something changing with his daughter, he begins to examine the situation and what he discovers catches him completely off guard. Now very concerned about Rachel drifting away from her Christian faith, he tries to do something about it!

“The media writes and issues reports about evolution almost every day,” said co-writer Dave Christiano. “And one thing I noticed is that these reports often change as man’s ideas change.”

“But the creation message hasn’t changed since day one,” adds Rich. “It should get fair coverage, but it does not.”

The Christiano Brothers see their movie as an important issue for all to look into. “Knowing where you came from will help you on your journey of where you are going in life,” says Dave.

The goal of A MATTER OF FAITH is to set the table so that viewers can launch a meaningful discussion about the subject.  “Either creation is right or evolution is right, but they both can’t be correct,” says Rich. “It’s a worthy topic to explore.”

For more on A MATTER OF FAITH, visit www.AMatterofFaithMovie.com.