(WNS)–Fallout 4 is the biggest video game release of the year by a significant margin. In its first 24 hours, Bethesda’s open world role-playing game for Playstation 4, Xbox One, and PC, sold more than 12 million units and earned more than $750 million. It took Call of Duty: Black Ops 3, another popular game released recently, 72 hours to make $550 million.

The Fallout series has a reputation for challenging players to grapple with difficult moral questions and giving them the freedom to choose multiple outcomes. While it’s rated Mature for violence and strong language, the latest installment took a significant step forward in its handling of morality.

In Fallout 4, the player’s character is cryogenically frozen in a vault just prior to a nuclear holocaust. When the character wakes up 200 years later, he witnesses his spouse being murdered and his baby kidnapped. Players are then set free to explore 80 square kilometers of post-apocalyptic Boston in search of the kidnapped child. One of the most compelling aspects of Fallout 4 is the sheer scope and detail of its world. Bethesda has done an excellent job of reimagining the Boston Commonwealth as a nuclear wasteland. Fenway park becomes a shanty town known as Diamond City, and the Massachusetts State House is the headquarters for a notorious gang. Players who’ve visited Boston will recognize numerous landmarks transformed by nuclear war. 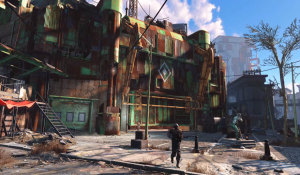 In addition to giving players free roam over a creatively reimagined Boston, Fallout 4 also challenges them to wrestle with ethical issues that have real-world corollaries. The game introduces players to various marginalized groups in the Commonwealth and asks them to consider whether they will advocate for those groups. Players can join a faction called the “Railroad” to fight for the rights of “Synths,” the Commonwealth’s most misunderstood inhabitants. Synths look and act like humans but are robots that are feared and shunned. The game also includes communities of people who have been marginalized due to overexposure to radiation. Players’ interactions with these groups evokes the current state of race relations in America.

As players explore the Commonwealth, they can choose to live as heroes or tyrants. Players can liberate settlements from raiders and gangs and rebuild them, bringing order to the chaos of the wasteland. Or, they can steal from and terrorize settlements and even join gangs preying on Boston’s inhabitants.

Fallout 4’s handling of morality outshines previous installments in the nuanced way the game judges the player’s actions. Previous Fallout games added “karma” points to the player’s character for virtuous deeds, like giving to the needy or liberating oppressed settlements, and subtracted karma points for evil actions such as theft or murder. Fallout 4 scrapped the karma system and replaced it with a companion system.

Early on, the game introduces players to multiple companions that accompany them on quests. These companions are incredibly handy, providing the skills, abilities, and support necessary to explore safely and complete quests. But if they don’t like a player’s actions, they stop offering their help.

While some companions have higher moral standards than others, almost all expect players to be decent human beings and do what they can to make the Commonwealth a better place.  Players can choose to explore the wastes alone, but doing so is more difficult and requires them to turn their backs on their friends. This relational morality system requires players to think about the impact their actions have on those closest to them, giving them an incentive to be good.