Some asylum seekers are finding Christ

(WNS)–Secular media are filled with stories about refugees coming to Germany, but they often skip one crucial angle: Because many asylum seekers come from nations with little or no religious toleration, Germany offers a new opportunity to investigate a Christianity they had only heard about.

Dennis Blea, who works with the Navigators in Germany, told me about two Iranian visitors to his church who “had always wondered what a Christian church looked like.” He called the refugee crisis a great open door for conversion: “I think we need to go to them and bring the gospel to them while they are ‘trapped’ in Germany.” 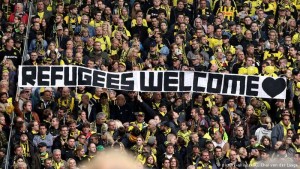 Others share Blea’s attitude. Even in southwestern Germany—not an arrival point for many asylum seekers—many Christians look forward to the arrival of refugees. Zach Linder, an assistant chaplain at Black Forest Academy in Kandern, said his community was excited to help and that a school is “even in the works of converting an old dorm into temporary housing for the refugees.”

But Vesam Heydari, an Iranian convert, claimed, “The majority of Iranians here are not converting out of belief. They only want to stay in Germany.” Although Germany does not give preferential treatment to Christian refugees, new converts to Christianity who seek asylum can appeal to a fear of persecution from their home countries.

Gottfried Martens, pastor of St. Mary’s Lutheran Church in Berlin, told The Wall Street Journal he has baptized about 400 people with Muslim backgrounds since 2011. Martens said “90 percent of the converts continue to come here even after they obtain asylum. They wouldn’t do that if they had done it just for papers.”

Jesus in Chapter 13 of Matthew’s Gospel spoke of a merchant who saw a fine pearl and sold everything he had to obtain it. Nariman Malkari can probably relate to that teaching: He told the Journal, “I live in a tent, but I have found Jesus.” Malkari, a 25-year-old computer engineer from Iran and recent convert to Christianity, was in temporary shelter while waiting for Germany to decide on his application for asylum.