“This is the statute of the law that the Lord has commanded: Tell the people of Israel to bring you a red heifer without defect, in which there is no blemish, and on which a yoke has never come.” Numbers 19:2

Pregnancy and the subsequent birthing disqualified the cow from ritual use according to the Jewish legal guidelines set out by Maimonides in the 12th century. This is the second cow in as many years to be disqualified from being qualified as a red heifer. 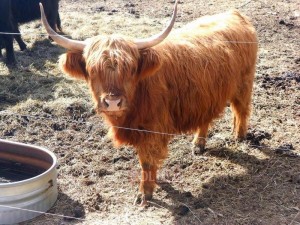 The Red Heifer that was found in New Jersey in 2013 and made known only a few months ago was disqualified recently when it gave birth to a baby black calf.

The baby calf smothered the dreams of many Jews and Christians around the world who had hoped that the red cow was a harbinger for the third Temple.

Over the almost 2,000 years since the destruction of the Second Temple, it is believed that all of humanity has become impure. Thus the red heifer would have given priests the ability to purify mankind once the messiah arrived.

Since this particular heifer has been disqualified, rabbis will now need to search for another in the future.

The cow’s owner, Herbert Celler of Howell Township, New Jersey, was previously offered $1 million for the purchase of the cow. Celler refused, stating that he would donate the cow when the Messiah came.

Two months ago, Rabbi David Feinstein, son of the late renowned Rabbi Moshe Feinstein, went to visit the cow and was visibly impressed by what he saw. While he refused to comment on the cow directly, he told Celler that “maybe you’ll merit when Moshiach (the messiah) will come.”

Celler, who is the son of Holocaust survivors, said that he was shocked when the cow gave birth. “We didn’t even know it was pregnant. For it to give birth now it would have had to become pregnant when it was a year and a half old, which is very unusual” he said.

Over the past few months, some 37,000 people came from all over the country to visit the cow, making it quite the local tourist attraction. Online responses to the news of the cow’s disqualification met with frustration at the loss for the farmer as well as the spiritual loss for humanity.