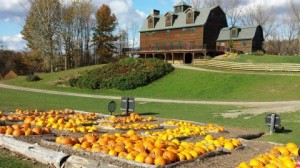 (WNS)–An administrative law judge in New York has found a couple guilty of discrimination because they refused to allow two lesbians to rent their farm for a wedding ceremony. The judge ordered the couple to pay $13,000 in fines and damages and undergo “anti-discrimination” re-education.

Robert and Cynthia Gifford own and operate Liberty Ridge Farm, a 100-acre property in Schaghticoke, N.Y., about 20 miles north of Albany. For 15 years, they have operated a family business renting various areas of the farm for public events, including weddings, parties, corporate meetings, summer camps, and an annual fall festival.

In September 2012, Cynthia Gifford received a call from a woman inquiring about the farm’s wedding options. During the conversation, Gifford determined the caller’s fiancé was also a woman and declined the booking.“We do not hold same-sex ceremonies here at the barn,” Gifford told her. When asked if that decision was legal, Gifford said it was legal because the couple operated a “private business,” the lawsuit claims.

Melisa and Jennie McCarthy filed suit against the Giffords in October 2012 for violating New York’s Human Rights Law, which prohibits a “provider of public accommodation” from discriminating on the basis of sexual orientation. Places of public accommodation include businesses that offer entertainment, recreation, or food. Religious organizations and private clubs with 100 or more dues-paying members are exempt from the law.

Melisa McCarthy told the court the Giffords’ rejection left her feeling “shell-shocked” and “horrible.” Jennie McCarthy, who had recently come out as a lesbian, was “very upset” because the policy was “kind of a blow” to her coming-out process. The couple eventually held a wedding ceremony on a farm in Central Bridge, N.Y., in August 2013.

“I think it’s our right to choose who we market to, like any business,” Robert Gifford said during an interview with Albany’s localFox affiliate. “We are a family business and we just feel we ought to stay down the family path.”

But on July 2, Judge Migdalia Pares declared that the government’s values trump the Giffords’ right to run their business according to their beliefs. Pares also determined the Giffords’ actions warranted a severe penalty, with the “goal of deterrence.” The Giffords must pay $1,500 to each woman for “mental pain and suffering,” as well as a civil fine of $10,000 payable to the state. Interest on the debt accrues at 9 percent from the date of the order until it is paid.

The order also requires the Giffords to “prominently post” in a public area a poster designed by the New York Division of Human Rights that details the state’s anti-discrimination law and features a red heading in all-capitalized letters that reads, “Discrimination really hurts.” The poster provides a toll-free number to report any signs of discrimination.

Lastly, the Giffords must establish “anti-discrimination” training and procedures for their employees and provide proof of such training “upon written demand,” as well as cooperate with any future investigations regarding their compliance with the order.

The Giffords have 60 days to appeal the decision.