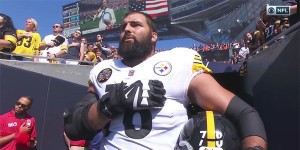 Former U.S. Army Ranger officer Alejandro Villanueva, player for the Pittsburgh Steelers, refused to sit out the national anthem with his team on Sept. 24 (Photo: NFL screenshot posted to Twitter)

Former U.S. Army Ranger officer Alejandro Villanueva – the Pittsburgh Steelers player who is being hailed as a hero after he defied his whole team Sunday and stood for the national anthem – actually earned his true hero status three years before he played professional football.

Villanueva – an NFL player who’s painfully aware that “freedom isn’t free” – earned a Bronze Star with valor after he reportedly pulled three wounded U.S. soldiers out of the line of Taliban fire in 2011.

During a 2014 interview with ESPN, Villanueva recalled a Aug. 25, 2011, event in Afghanistan when he was a lieutenant, 23-year-old Army football player and rifle platoon leader of the 2nd Battalion, 87th Infantry Regiment, 3rd Brigade Combat Team.

Several Taliban insurgents were embedded in Kandahar when Villanueva’s Army Ranger’s unit came on the scene. But when the U.S. troops arrived, the Taliban were nowhere to be seen. So they began questioning an Afghan elder about the terrorists’ whereabouts.

ESPN described that fateful day: “As the elder began to explain, Villanueva and his troops were ambushed by as many as eight Taliban militants in a spray of bullets.”

Spc. Martin Piggott was shot in the kneecap. Sgt. Roy Dutton was shot in the back of the leg. Army Pvt. 1st Class Jesse Dietrich was shot near the armpit. Under heavy fire, Villanueva pulled the wounded Dietrich down an alley and into a second mosque, where a medic took over. Villanueva returned to fight, but when he came back to check on the injured soldiers, the medic told him they needed to move the wounded to a safer location. Carrying Piggott on his shoulders, Villanueva took the three to a nearby school, where they waited for a helicopter that would transport the wounded to the city of Kandahar.

“Help me, sir,” Dietrich cried to Villanueva.“He was pretty scared,” Villanueva said. “He kept asking for help.” By the time Villanueva lifted Dietrich onto the helicopter, his eyes were purple. He died a brief time later.

“As the platoon leader, I feel responsible for everything my platoon does or fails to do,” Villanueva said. “I failed to keep Jesse Dietrich safe, and you know, it was just tough. … I keep thinking of other ways I would have done it, but it was a very tough mission and the enemy beat us that day. It was just a really bad night.”

Villanueva, who told ESPN he isn’t proud of his medal because Dietrich didn’t survive, served another tour in Afghanistan. He also played four seasons at West Point.

As WND reported, the Steelers remained in the locker room during the playing of the national anthem. Perhaps it’s because he is painfully aware of the true cost of freedom. But Villanueva, who served heroically under the nation’s flag, simply couldn’t sit the anthem out. Not after his own combat brothers gave everything they had in service to their beloved country.

So Villanueva defied his entire team. While he has said that he sympathizes with player frustration over racial concerns, he chose to stand at the head of the tunnel leading onto the field, his right hand held proudly over his heart. Villanueva sang the words of “The Star-Spangled Banner” as he stood alone.

Caption: Alejandro Villanueva, the U.S. Army Ranger who was signed by the NFL following three tours of duty in Afghanistan