NFL commish: ‘Fans should be OK with anthem protests’

By The Horn Staff 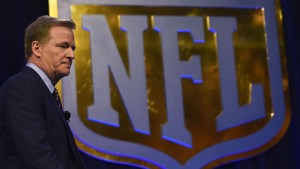 NFL Commissioner Roger Goodell arrives for the Super Bowl 50 press conference February 5, 2016 at the Moscone Convention Center in San Francisco, California.
A perfectly scripted duel between Peyton Manning and his heir apparent Cam Newton will captivate America on Sunday as the Super Bowl marks its 50th anniversary with a quarterback showdown for the ages. / AFP / Timothy A. CLARY (Photo credit should read TIMOTHY A. CLARY/AFP/Getty Images)

NFL Commissioner Roger Goodell said on Monday that he won’t take any action when players politicize America’s favorite sport by sitting or kneeling during The Star-Spangled Banner. Instead, he wants people to be more understanding when a sporting event is turned into a big liberal protest.

At a Q&A session with Arizona Cardinals season-ticket holders, Goodell implied to the crowd that Americans need to get comfortable with these protests because some players “have different viewpoints.” Get comfortable with disrespecting America and the flag?

“The national anthem is a special moment to me. It’s a point of pride,” Goodell said. “But we also have to understand the other side, that people do have rights and we want to respect those.” Yes, of course they have those rights…But viewers have rights, too — and many say they do not turn on the NFL to get liberal politics shoved