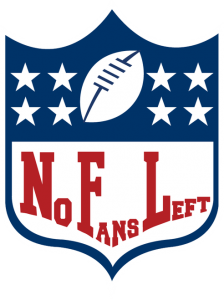 “The NFL has decided that it will not force the players to stand for the National Anthem. Total disrespect for our great country,” President Donald Trump tweeted in reaction to the decision of the National Football League (NFL) this week to leave it up to the players whether to stand during the playing of the “Star-Spangled Banner.”

Faced with widespread fan displeasure over the spectacle of its players kneeling during the playing of the National Anthem, declining ticket sales, and declining TV ratings, the NFL met on Tuesday this week with representatives of the players’ union, and other players, seeking a solution. Instead of getting the players to stem the tide of discontent, the NFL has decided to risk further alienation by morphing into a political organization.

The NFL even promised the players that it would back the causes targeted by the protesters, such as reform of the criminal justice system. While reform of the criminal justice system is certainly a legitimate issue for public discussion, many fans would question why the NFL, as an organization, should be taking particular policy positions on that issue, or any other issue. After all, there are many issues that concern Americans, such as immigration, abortion, taxes, spending, and the like. Will the NFL now take a position on these issues, as well?

It should be emphasized that the protests began with then-San Francisco 49ers quarterback Colin Kaepernick arguing that police are being rewarded with paid time off for killing people. Kaepernick has also praised former Cuban dictator Fidel Castro. One must wonder exactly what the various kneeling players are trying to say with their protests? Do they hate the country? Kaepernick said he could not stand to honor the country. Do they favor communism, since Kaepernick publicly praised Castro? It is not clear what is the ultimate goal of the protesters, or how long they intend to, as Trump and millions of Americans have put it, “disrespect” the flag.

Two protesters even told Dallas Cowboys owner Jerry Jones, as he was in the lobby of the hotel where the meeting took place, that the players were kneeling to end white supremacy.

Jed York, the co-owner of the 49ers, responded to Trump’s criticism of what the NFL has done with defiance. “We need to be above petty attacks from anybody, because racial and socioeconomic inequality has existed in this country for too long. You got to block out the noise and go do your job, and that’s what we need to focus on.”

After the four-hour meeting of 11 owners and 13 players, Macolm Jenkins, a player for the Philadelphia Eagles, made it clear that the NFL is now a political organization, and not just a forum for entertainment. “We feel a real responsibility to our country, to our communities, so we’re working through ways to really have long, lasting, real change.”

And the NFL hierarchy supports this politicization of the league. NFL Commissioner Roger Goodell and Seattle Seahawks player Doug Baldwin wrote a letter to members of Congress in support of the Sentencing Reform and Correction Act. The bill’s stated purpose is to increase rehabilitation of convicted criminals.

There are indications that the NFL owners are split on this new political role of the league. The Jacksonville Jaguars have apologized to military veterans in their city over the demonstrations that took place when the team played in London. The Associated Press has reported that Mark Lamping, president of the Jaguars, sent a letter admitting the team was “remiss in not fully comprehending the effect of the National Anthem demonstration on foreign soil has had had on the men and women who have or continue to serve our country.”

One fan reacted by paying to have a plane fly over the Jaguars’ stadium during a game, calling for a boycott of the team, in particular, and the NFL, in general.

Direct TV has refunded some of its customers their money on NFL Sunday Ticket (a way for fans to see games in other regions, in addition to their own). Viewership of television games is down markedly, as fans react in anger to the politicization of professional football.

While some conservatives decry the time that fans spend in watching sporting events, rather than engaging in political activity, there is another way to look at this issue. We could ask the question, “Wouldn’t it be great if the government and politics played a smaller role in our lives? Shouldn’t fans be able to simply watch a football game, without having politics interjected into it?”

When Alexis de Tocqueville came from France in the 1830s, eventually writing Democracy in America, he marveled at how little a role that government played in the daily lives of Americans. Now, we have come full circle. Even our leisure activities have become political. It gives the saying “political football” a whole new meaning.

The NFL, as a private organization, has a constitutional right to allow its employees to trash the flag and the country, and recast itself as a political organization. They could even weigh in on how much money should be in the budget for the Department of Agriculture, if they wish. On the other hand, disgruntled fans have the right to turn the channels away from an increasingly political organization, and to refuse to attend the games.