Security officials said the accidental strike happened while the military was searching for Boko Haram extremists.

The bomb landed on a government-run camp in the town of Rann, near the border with Cameroon and Chad. The camp houses about 25,000 refugees displaced by Boko Haram’s insurgency. 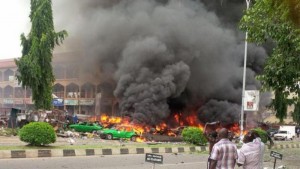 The International Red Cross said the bombing killed six Nigerian Red Cross members and injured 13 others. The humanitarian group in a statement said the workers were part of a team that brought in food for the refugees.

Doctors without Borders confirmed the casualties and warned the death toll could rise. Pictures from the scene showed several injured persons sprawled on mats on the floor in a tent clinic, while blankets covered some of the dead lying on mats outside.

“The team is completely overwhelmed, since more than 200 people are injured,” said Hughes Robert, the program manager for Nigeria.  “They are now trying to stabilize the victims who need the most care.”

Doctors without Borders in Cameroon and Chad have said they are willing to treat some of the wounded.

The bombing is the first time Nigeria’s government has admitted to mistakenly striking civilians in the fight against Boko Haram, but communities have in the past reported civilian deaths in military airstrikes.

Maj. Gen Lucky Irabor, commander of military operations in the northeast, confirmed the bombing also injured two soldiers. Irabor said he ordered the mission based on information claiming Boko Haram insurgents were in the area and geographic coordinates of their supposed location. An investigation is underway, he said, adding the air force would not deliberately target civilians.

Nigerian President Muhammadu Buhari said he received the news with regret and expressed his condolences to the affected families.

“The federal government will fully support the Borno state government in dealing with the situation and attending to the victims,” Buhari posted on Twitter.