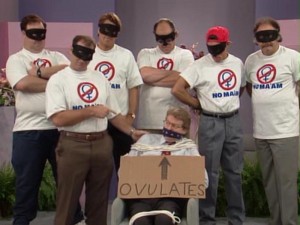 C’mon, I know you’re thinking it too.

If you watched television in the 1990s, I’ll bet you reminisced, however briefly, over the series Married With Children as the corporate media oozed their praise over the number of women and emasculated men who turned out on Saturday to ostensibly march for a host of “social justice” causes.

Specifically, I was reminded of the episodes that featured the Al Bundy creation of NO MA’AM, the acronym for the National Organization of Men Against Amazonian Masterhood. Al Bundy and his pals formed this anti-feminist group as a pushback against the social and political agenda of radical feminists.

The satirical nature of those episodes, at least those that served as the cause for the creation of this anti-feminist movement, appeared to play out across the networks this weekend. What I saw was a sad caricature of the fictitious “Amazonian Masterhood,” the target of the equally fictitious NO’MAAM, minus the over-the-top satire featured in the TV series.

It was a sad caricature indeed, for the vulgar, four-letter word utterances of Madonna that were broadcast unchecked by censors into living rooms across America were also applauded on-site by mothers and grandmothers who brought their young children. Her profane utterances were only slightly overshadowed by her public admission of wanting to bomb the White House, which served as yet another display of the tolerance embodied by the “Love Trumps Hate” crowd.

For those familiar with Married With Children, I kept waiting for a cut-away of someone rolling out Chris Matthews bound to a chair in the fashion of Jerry Springer, but it was not to be.

Most assuredly, though, Madonna set both the tone and example for this defining moment in the history of “social justice,” where the profane and violent is embraced and celebrated rather than condemned.

I suspect it could have been Madonna and the organizers and participants of this march that Al Bundy had in mind when he formed NO’MAAM, for the women I personally know have much more dignity, class and self-respect than those who littered the streets on Saturday.

As for the “men” who participated, I wonder just how emasculated and self-loathing a man must be to permit his own subjugation to such a shameful display of perversion under the façade of social justice.

What I witnessed this weekend was not a laudable event to which real women could point to as a proud moment in their history of for whatever “social justice” cause they were promoting. Instead, I saw the result of generations of moral and spiritual decay, which is a consequence not of intolerance, but of tolerance.

For too long, we have been too tolerant. We have tolerated the perversion of our Judeo-Christian beliefs, and have been forced to tolerate what is otherwise intolerable in a morally and spiritually healthy environment. We have permitted our leaders to define our limits of tolerance by laws and under the pretext of “social justice” while too many of us have stood idle.

The march was indeed a sad caricature of the nemesis of NO’MAAM, where life imitates art, or in this case, the Amazonian Masterhood depicted in television satire.

Admit it. I knew you were secretly thinking it too.