Not in my bathroom!’ a coming trend? 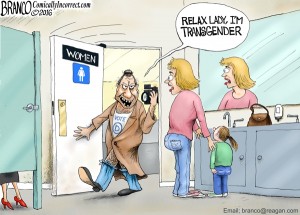 Why is it that there are few, if any, Transgender Bathrooms in the White House, the House of Commons, at Brussels EU headquarters, the UN or in the hallowed halls of any other nation’s ivory towers?

Many of the occupants of these edifices, who spent taxpayers’ billions in renovation projects, didn’t see the march of the transgenders coming?

It’s because like taxes, bylaws, decrees, ordinances and rules sent down the pike from authorities the world over, the forced use of transgender facilities are only at issue for modern day society’s much abused rank and file folk.

The global elite of politics are far above and away from the maddening proletariat. The day is looming when an average citizen will be arrested if somehow caught using the bathroom of a president, prime minister or king.

It’s absolute privacy for all of the above, but against all “Inclusivity” rules for members of the masses who don’t want to share latrines with the opposite sex.

You can depend on not venturing into the wrong bathroom in open areas of the White House unless you’re the moron that didn’t recognize the picture of Barack Obama centered in his logo on the door.

Wednesday Rave Nights still taking place at the White House, there must be lots of celebrities stumbling their way to a variety of doors, not necessarily called ‘Powder Rooms’.

With retailers wanting to be seen as “inclusionary” shoppers should be aware of being taken by ‘bathroom surprise’ when nature comes to call.

“As states and school districts grapple with laws or allowances around transgender bathroom use, one retail giant has made its stance public. (Washington Post April 20, 2016)  “In a statement on its company website, Target declared its commitment to “equality and equity.”

“Inclusivity is a core belief at Target,” the statement said. “Most relevant for the conversations currently underway, we welcome transgender team members and guests to use the restroom or fitting room facility that corresponds with their gender identity.”

“The discount retailer further explained: “Given the specific questions these legislative proposals raised about how we manage our fitting rooms and restrooms, we felt it was important to state our position.”

“The announcement appears to be a direct response to the controversial “bathroom bill”signed into law late March by North Carolina Gov. Pat McCrory. The legislation’s most contentious provision requires transgender people to use public restrooms based on the gender listed on their birth certificate.

“Target is based in Minneapolis, where Gov. Mark Dayton directed state employees to “cease all nonessential state business travel to North Carolina until further notice” earlier this month.

“While several large companies—Paypal, Apple and Google, to name a few—have condemned the North Carolina bill, Target may be the first major corporation to publicly outline its own bathroom policies.

“Molly Snyder, a Target spokeswoman, told the Minneapolis Star-Tribune that Tuesday’s statement was not about a new policy. Rather, the company chose to be “very overt in stating it” in light of the current political climate.

And for all those who have heard enough: “This may encourage other corporations to show their hand as well.

“Target being more proactive about it could very well open—or force—the dialogue,” Carol Spieckerman, a retail consultant, told the Star-Tribune. “Any time a retailer takes a more vocal stance, the microphone goes in front of all of the others.”

Better take your heart defibrillator along in your handbag while out on shopping trips with your elderly Auntie Connie.  Connie had been told by her Mama for years that “bad men” lurk around ladies’ washrooms.

That the left is taking the world ‘inclusionary’ will be lost on her.

And wait until protective fathers insist on trailing their young daughters to open-to-all transgender designated washrooms. Store security will be taking their life in their hands to get in the john to break it up. Bathroom Police will be the latest job opportunities for millions of unemployed.

The lib-left who are revisionary in all that they do, got the transgendered bathroom idea from their Uni-Sex craze of the ‘60s when it became hip or hippy to go to a Uni-Sex hairdressing salon or clothing shop. So now arenas, public schools, auditoriums and retail are caught up in what is fast becoming Bathroom Politics.

Why all of a sudden has the Transgender issue in the bathroom become the latest craze of the lib-left? Because God gave you your gender at conception wasn’t good enough for lib-left ‘progressive’ politicians who insist it is THEY who are God!

There can be little argument that Mama was right on instructing her brood at the door: “Hold it ‘til you’re back home.”