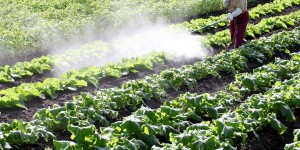 NAFLD can lead to cirrhosis, and increases the likelihood of diabetes, heart attacks, and strokes. NAFLD affects over 64 million Americans each year and costs $103 billion to treat. And now it’s clear that the ubiquitous weedkiller Roundup, available at all hardware stores, can cause it.

Meanwhile, Monsanto and the Environmental Protection Agency (EPA) are fighting to keep secret documents that detail Monsanto’s interactions with top EPA officials regarding the agency’s safety assessment of glyphosate, the active ingredient in Roundup. The only reason to keep this information from getting out is that it proves what many of us already suspect: that Monsanto colluded with the EPA to get the result it wanted—a report that said glyphosate was “not likely to be carcinogenic to humans.” This report is flatly contradicted by the World Health Organization’s finding that glyphosate is a “probable carcinogen.”

In particular, the herbicide paraquat has been gaining in popularity—seven million pounds of this weedkiller was dumped on American crops in 2015.

Paraquat causes Parkinson’s disease. In fact, it’s so good at causing Parkinson’s that researchers routinely give it to mice to create an animal model. Multiple studies from the National Institutes of Health (NIH) show clear links between the chemical and Parkinson’s. “It’s about as persuasive as these things can get,” said one NIH researcher.

Paraquat has been banned in Europe, and China announced in 2012 that it would phase out its use to “safeguard people’s lives.” Since drinking even one sip of paraquat can be lethal, it is used in suicides; in Taiwan, researchers say it caused 160 deaths a year. After South Korea banned paraquat, there was a 10% decline in suicides.

So why are US regulators allowing something so toxic to be applied to American food? Last year, the EPA released a memorandum that outlined several “mitigation measures” for the safe use of the chemical—suggestions for how farm workers should safely handle paraquat. The EPA is also weighing whether to continue to allow paraquat to be sprayed on American crops, but a decision is not expected until 2018.

We won’t hold our breath. The same crony influences that are undermining the agency’s review of glyphosate will no doubt be pulling the strings if and when the EPA considers revoking paraquat’s registration. We must keep the EPA accountable.

Action Alert! Write to the EPA and tell them to stop stalling and ban paraquat. Please send your message immediately.