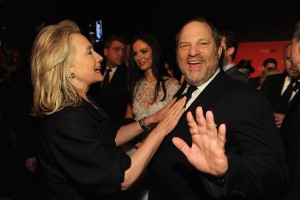 Two prominent women in media told TheNYT that they personally warned Hillary Clinton’s presidential campaigns in 2008 and 2016 that Weinstein was a known sexual assaulter and that it was highly unwise to be so closely connected with him.

“I just want you to let you know that Harvey’s a rapist and this is going to come out at some point,” actress and writer Lena Dunham reports telling Kristina Schake, the Clinton campaign’s deputy communications director, in 2016. “I think it’s a really bad idea for him to host fund-raisers and be involved because it’s an open secret in Hollywood that he has a problem with sexual assault.”

Dunham says the Clinton staffer appeared to be shocked at her statement and told her she would immediately report it to Clinton Campaign Manager Robby Mook. Mook told The NYT that he was never warned about Weinstein.

Dunham also says she told Adrienne Elrod, a spokeswoman for Hillary Clinton, about Weinstein. The actress told The NYT that the Clinton campaign never did anything about her complaints and that Weinstein helped organize a star-studded fundraiser for Hillary Clinton weeks after she spoke with Elrod.

Along with Dunham’s warnings, Tina Brown, a well-known magazine editor, says she told a member of Clinton’s team in 2008 to watch out for Weinstein and to distance the campaign from him.

“I was hearing that Harvey’s sleaziness with women had escalated since I left Talk in 2002 and she (Clinton) was unwise to be so closely associated with him,” Brown said.

Weinstein coughed up tens of thousands of dollars towards Hillary Clinton’s various campaigns for Senate and for the presidency. He offered her access to A-list celebrities for her fundraising events. Weinstein even threw $10,000 towards former President Clinton’s legal defense when he faced impeachment articles during the Monica Lewinksy scandal.

The Clintons reportedly shared a dinner table with Weinstein just days after Hillary lost to President Donald Trump in November 2016. Hillary and Weinstein were even reportedly planning a documentary TV show about her 2016 bid for the presidency.