OAC Hits the Streets of NH 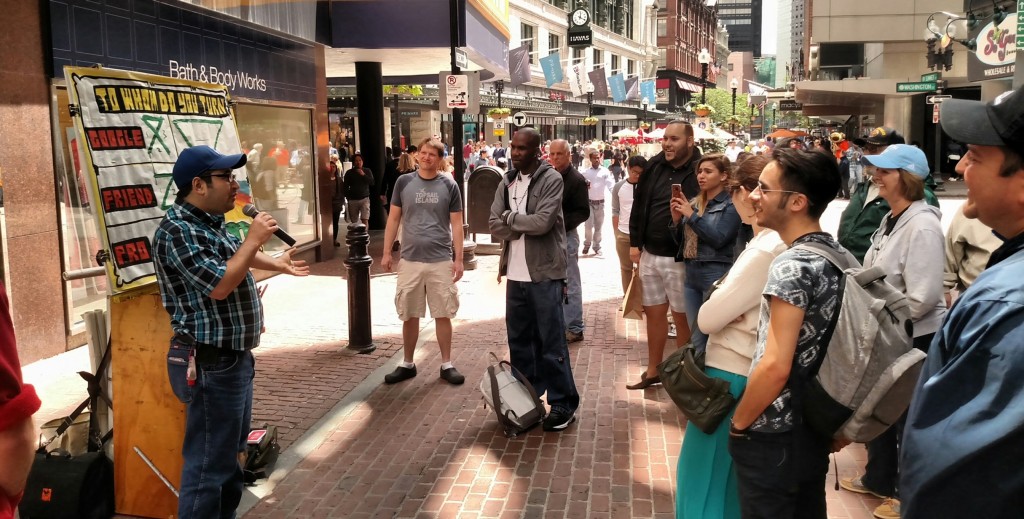 Every Sunday I hear my Pastor talk about our charge as Christians to engage in the work of spreading the Gospel. And it’s always a challenge to find the right ways to do this as individuals. As you know I’ve been fortunate to write for this Christian Newspaper, and in turn have met dozens of folks who’ve answered the call on their heart setting out across the globe and bringing the Gospel to the ears of all in need and who would hear it. Nevertheless, I still feel a sense of confusion about how Jesus would work through me. Maybe I’m still developing the skill set he has in mind for me. Maybe I haven’t done enough in the place I am today. Truth be told, only he knows the answers to those questions. But in a world which appears on the brink of total disaster on any given day, it’s almost as if we should be in high gear, working like crazy believers and touching as many lives as we can.

Look, there’s no special degree required to look around and see the need. Mankind is spiraling at breakneck speed toward darkness on so many levels, both nationally and internationally. The value of human life is at an all-time low, so low in fact that the butchery of our children in the womb is excused away as women’s health, and infant body parts are sold under the guise of the so-called scientific advances they may or may not yield. The rise of Godless dictators mirrors a time in the early 20th Century when entire nations were lulled into a deadly complacency of the heart, leaving millions in harm’s way and still more millions dead. Serial murderers and criminals now feast on the innocent, portraying their gruesome deeds, actions and a lifestyle of subjection imposed on the unbeliever (infidel), and all sold as somehow in the name of a higher power. And false narratives are bandied about in place of common sense, and reason, and in our schools and halls of government, leaving many in search of accountability and truth in an ever changing 21st century dynamic.

So, you see my fellow believers, when we consider all this as it relates to an overall human condition God never intended for us, the Gospel of Jesus Christ keeps coming up as the only definitive solution to what ails this wounded world, and is like a roadmap back to a place in the light. But how do we get that word out? What do we do that hasn’t already been done? Is it more of the old ways, or something new that will turn the tide. I would tell you, that while the Gospel as written is the indisputable framework of revival, I’m often floored by the creative and often ingenious ways my missionary friends have come up with to reach out to those in need. That said, sometimes the basics of putting foot to pavement and getting out in the open so all may see and hear us can make all the difference.

Street evangelism? Really? Creating a presence where there was none just an hour before. I guess that sometimes those tried and true approaches are actually the best way to grab the attention of those lost in the wilderness of a life without Christ. And I’m sure there’s a certain satisfaction to proclaiming the word to people engaged in the walk of everyday life, as well as sharing one’s faith one on one which offers a personal touch to an otherwise reluctant recipient.

14 years ago Lisa M. Campbell wrote an article for “The Good News” about “Christian evangelists serving with Open Air Campaigners or (OAC), folks who go out several times a week and preach the Gospel on city streets, neighborhoods, parks, subways and college campuses. As a non-denominational group, OAC began in 1892 in Australia, and has trained missionaries in more than twenty countries worldwide. Their motto is “Presenting Christ by All Means Everywhere”, and they’re dedicated to reaching lost people with the life-saving message of the cross”. And as fate would have it, they’re also at the core of the very messaging I write about today. 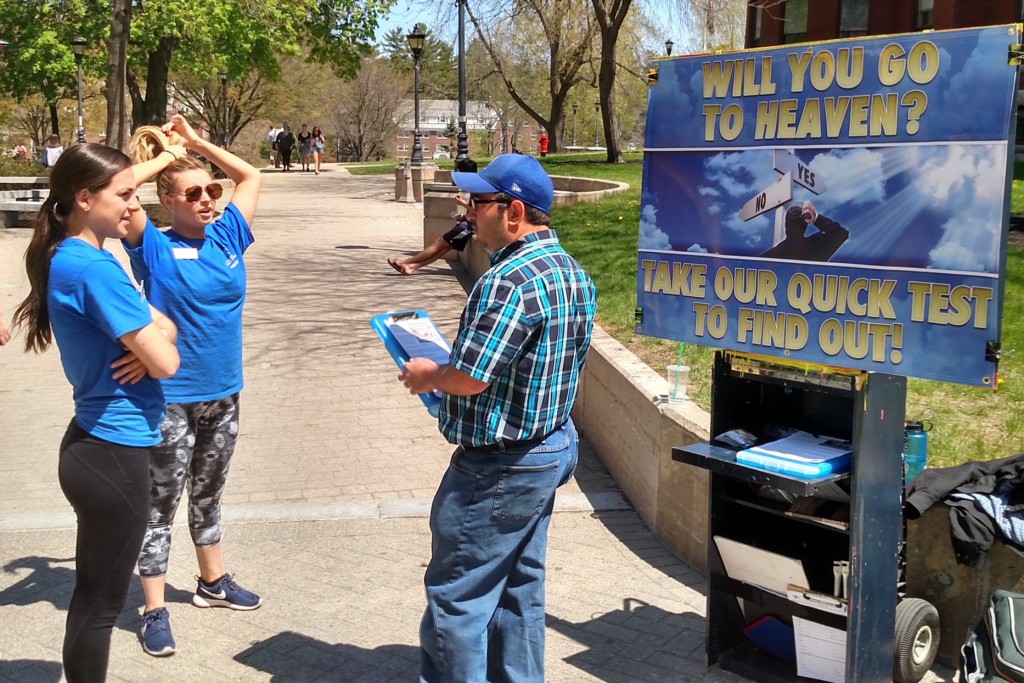 Mark Sohmer of luke-15.org, an experienced “Open Air Campaigner”, is one of these “messengers” and I spoke with him recently about his efforts to bring the good work of OAC to New Hampshire. I was a little surprised to learn Mark actually grew up in a Jewish home where he learned that “Jews are not supposed to believe in Jesus.” He explained that he became hardened to the name of Jesus, and even rebuffed and challenged those who professed belief in Jesus while he was in college. But then he met Josh, a somewhat new believer himself, and Mark would learn that God can save anybody…

You see when Josh engaged Mark about how he could deny that which he didn’t know anything about, and how he hadn’t read the Bible, the most widely read text in all of human history, Mark became incensed and moved onto his prized intellectual battlefield to prove to his new friend that believing in Jesus was a fools play.

After picking up and saturating himself with the New Testament however, Mark was flabbergasted, (after about a week and a half of exhaustive research and soul searching), to discover that Jesus was actually really JEWISH… Hard as he tried, he could not dismiss the Savior of the world and instead continued down his investigatory pathway only to acknowledge his sin and be saved himself. Jesus Christ was the true and living Messiah… Whoa…. Since that time of realization, Mark’s heart has been filled with the gift of Christ’s love and mercy, and he’s channeled that love into a ministry for the aforementioned lost of this world. Mark’s life’s desire is that everyone hear the word of God, and that they be saved by its transformational power.

As a side note, and having spent some of my own childhood growing up in a Jewish neighborhood, I’m always intrigued by the things that bind the Jewish and Christian peoples, and their stories of faith. I’m happy to have had my life influenced at a younger age by these experiences. It truly helped me avoid the pitfalls of stigmas and stereotypes, and I was sure Mark’s story would only reinforce my faith and belief systems.

It didn’t all happen at once for Mark though, and it’s been twenty years since that fateful time when Mark realized that all his college successes and popularity were not the be all and end all in his life. While he would still live out (this) life’s greatest expectations to the fullest, as loving husband to Shelby, father to four beautiful children, and as a successful IT executive with Fidelity Investments, there was something tugging on his heart which had its beginnings during his college years when he simply “couldn’t shut up about Jesus”. Leaning on what he’d read of John:28, his realization of the text of that passage convinced Mark that the truth of Christ as our Savior was not only true for him, but for everyone. Thus Mark would summon the courage and ultimately walk away from the norm to answer Christ’s call to service.

Mark would eventually cut his teeth as part of OAC and learned that the “the missions organization that no one’s ever heard of” was likely the single most effective way to smooth the road to Jesus for the masses. In the end folks, what was Jesus doing back then? Street evangelism… By way of training in an organization that’s been around since the 19th Century, Mark learned the art of visualization and object lessons as a means to break the ice with those in need of the Word. Painting on the leftover paper that the Boston Globe was going to throw out, and using that art as a spiritual language of sorts, Mark was growing and thriving in an organization which had laid roots in 35 countries and 20 cities across the U.S. 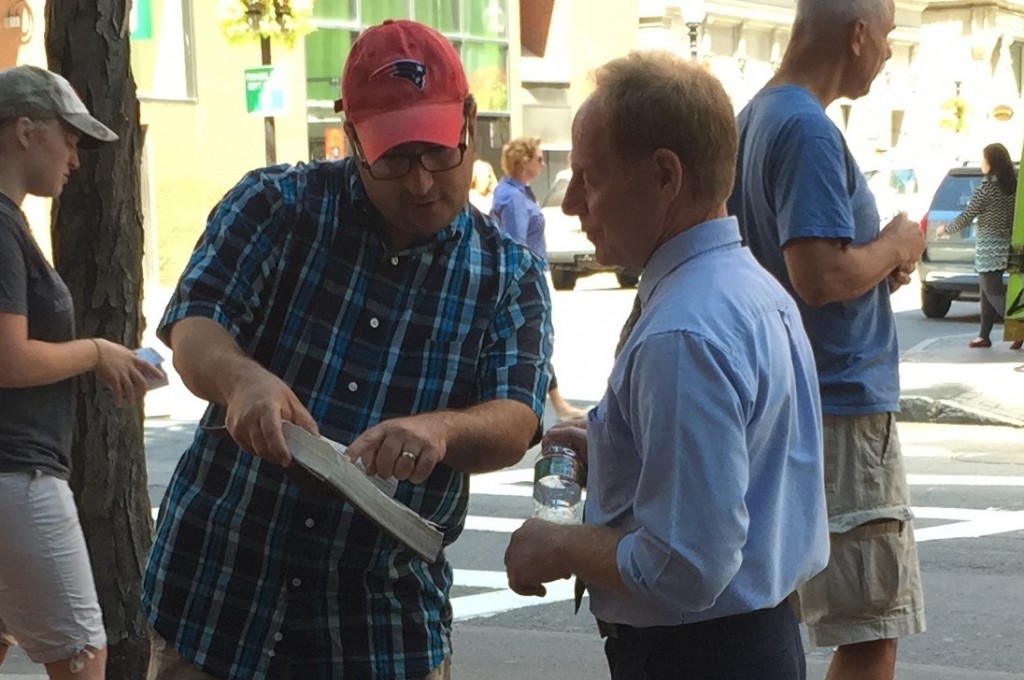 Mark shares Gods word with folks on a busy sidewalk

Eventually landing in the Boston Office, but living in New Hampshire, Mark grew weary of the commute into Bean Town and began to see his way to growing OAC to the New Hampshire area. Sticking with the message of OAC in the sense that it was bringing church to the people, whether in a bank, homeless shelter or kids club, and not so much getting people to the church, a new mission field north of his current one was the next most sensible move. With his message of “Turn and Trust”, (Repent and Believe), Mark has continued to live out the task laid on his heart by Christ.

Armed with Bible tracts in 35 languages Mark likes to think he’s on an international mission no matter his location. And with a goal of 25 by 2025, in terms of outreach branches, his “go where the people are” mentality is working to bring folks to Christ. Welcomed on college campuses for his non-confrontational approach, Mark is a man singing a song I want to hear. Willing to forgo the argument for the conversation about Jesus, he sees the importance of the how and why which sometimes stymies even the most ardent believer. And acknowledging that it’s not about the messenger so much as the message, God will work mightily through him, I’m sure of it.

If you hadn’t guessed, and while I’ve been moved and educated by all those whose efforts I’ve highlighted in His name, my conversation with Mark ranked up there at the top. This is truly a man who I believe God wants in the streets doing the heavy lifting. I hope to take you up on your invitation Mark. Be well…

If you can see what I see in this hands-on approach to the “spreading the Word” part of our responsibility as the saved, please consider donating on Marks web page luke-15.org and hit the donate tab to be part of the solution. Also, Mark has been invited to speak at a “Men’s Night Out” to be held at the Halifax Country Club Route 106 Halifax, MA. This would be a great opportunity for those with questions about how to get involved. There will be a dinner and Mark will speak about his two main goals:

and see God work as they have never imagined.

God Bless you all and have a blessed Thanksgiving…

If you would rather mail in a check, please make it out to “Open Air Campaigners” and write “The Sohmer Family” in the “memo” section of the check, or include a note indicating that the funds are to go to The Sohmer Family. Please mail it to:

Open Air Campaigners is certified through the Evangelical Counsel for Financial Accountability, so you can trust that your donations are being used properly. You will also receive a receipt for tax purposes.