Obama Snubbed by Chinese, Forced to Exit from Behind of Air Force One

China’s leaders snubbed Barack Obama during his last trip to Asia recently. The authorities refused to provide a staircase to Air Force one and forced him to exit from the “ass” of the plane.

The Guardian reported: China’s leaders have been accused of delivering a calculated diplomatic snub to Barack Obama after the US president was not provided with a staircase to leave his plane during his chaotic arrival in Hangzhou before the start of the G20. 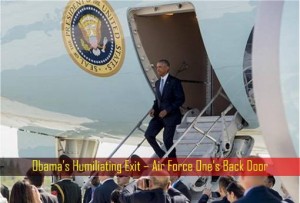 But the leader of the world’s largest economy, who is on his final tour of Asia, was forced to disembark from Air Force One through a little-used exit in the plane’s belly after no rolling staircase was provided when he landed in the eastern Chinese city on Saturday afternoon.

“The reception that President Obama and his staff got when they arrived here Saturday afternoon was bruising, even by Chinese standards,” the New York Times reported.