Of course: ESPN fires Curt Schilling for defending himself against the LGBT mob 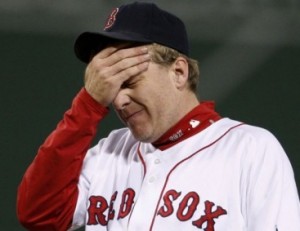 If there’s a less surprising story today, I can’t imagine what it would be. Clearly Curt Schilling didn’t fear the consequences of standing up for himself against a mob of self-proclaimed social justice warriors and LGBT activists determined to paint him as some sort of hater.

Last year they took him off Sunday Night Baseball for daring to disagree with the left-wing orthodoxy on Syrian refugees – not on an ESPN broadcast, mind you, but on his Twitter feed. His punishment was to be moved to Monday Night Baseball. But now that he’s offended the one group of people no one can offend and survive, he’s out entirely:  On Wednesday, Schilling was fired from his job as an ESPN baseball analyst after comments on Facebook critical of transgender rights.

The post included an image of a man wearing a long blond wig and revealing women’s clothing and the phrase, “Let him in! To the restroom with your daughter or else you’re a narrow minded, judgmental, unloving, racist bigot who needs to die!!!”

In response to recent laws in several states that restrict bathroom access for transgender people, Schilling added: “A man is a man no matter what they call themselves,” and, “Now you need laws telling us differently? Pathetic.”

The network, which suspended Schilling from the Little League World Series last year over a tweet in which he compared Muslim extremists to Nazi-era Germans, said Wednesday night that he had been fired.

“ESPN is an inclusive company,” the network said in a statement. “Curt Schilling has been advised that his conduct was unacceptable and his employment with ESPN has been terminated.”

You have to think Schilling knew, or at least suspected, this might happen. And while I’m not in his head, I wouldn’t be surprised at all to learn that he just didn’t figure the job was worth fighting for if it meant every time he expressed a perfectly honest and reasonable opinion about something, he’d be at risk of suspension or firing. Who needs that? Especially when you made millions playing the game and surely don’t have to worry about where your next meal is coming from?

Schilling was a good game commentator and seemed to enjoy the job, but he sadly found himself working at a network that today seems to care more about appeasing social activists than about presenting sports broadcasts.

And let there be no doubt: Everything ESPN did here was driven by fear. It is not against ESPN’s rules for employees to express political opinions. Stephen A. Smith (of whom I am a big fan by the way) does it all the time. But what you can’t do is express an opinion that will incite the activists who specialize in protests, boycotts, media campaigns and so forth. And this has been true for a long time.

Remember Rush Limbaugh’s very brief tenure as a member of the NFL Sunday Countdown crew? That only lasted until Rush had the gall to say the media exaggerated Donovan McNabb’s talent because they have an interest in making black quarterbacks look good. That statement was 100 percent true, but it bothered the wrong people so Rush was fired. Schilling’s statement was also 100 percent true, but the same twisted principle applied, so he’s out too.

My wife wondered aloud this morning if Schilling might have an unfair termination case. I don’t know the employment laws in Connecticut, where ESPN is based, so it’s possible h 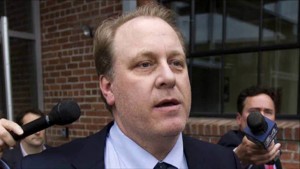 e might. But here’s the thing: Employers used to be careful about firing people because they feared suits like that. Now they fear the wrath of LGBT activists more than they fear the wrongful termination suit. They’d rather take their chances in the courtroom than have a

bunch of angry cross-dresssers waving rainbow flags outside their headquarters, while the media dutifully serves as the protesters’ stenographers.

Corporations usually make decisions on the basis of who or what they fear most. Know this: They now fear the LGBT crowd more than they fear anyone or anything else, which means you know who’s calling the shots. At least Curt Schilling went down in this battle fighting. And maybe he’ll yet win the war.